He is a soldier in the Earth Federation Forces, but is actually a spy for the Principality of Zeon, and serves as a liaison between Elran and M'Quve. When General Revil was informed that the Black Tri-Stars had descended to Earth via Zanzibar, he was suspected by Elran of being a double agent. Shortly before the battle of Odessa, Amuro Ray and Sayla Mass witnessed Judock departing in a small plane from Zeon controlled territory. They follow him to the Big Tray and Judock is arrested by other Federation soldiers. 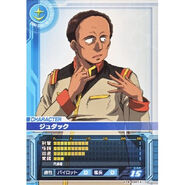