Judau is brash and smart-mouthed, always suffering from greed in the beginning. His need for money is because he wishes to help his little sister, Leina Ashta, go to private school and have a better future than he will. Because of this, he often skips school to work as a junk dealer and bring in materials for money, trying to avoid Beecha at times to avoid sharing the profits. He resorted to stealing the Zeta Gundam multiple times before becoming a full-time mobile suit pilot. Judau seems to despise adults, blaming them for the war that is now occurring.

However, this attitude slowly changes as he becomes a pilot, soon wishing to end the war while trying to protect Leina. He believes that the war should be stopped, and views the fighting as pointless as more and more lives are being lost each day, some of which included his friends, such as Elpeo Ple. His perspective on Bright and the rest of the Argama crew also change as well, becoming good allies with all of them and even changing their own opinions regarding the war, such as when Bright had the chance to destroy a colony, but did not when Judau convinced him. He also develops a sense of sympathy towards his enemies; in spite of his distaste for Haman, he did offer to let her come with him (showing that he did possess a degree of sympathy towards her) and was genuinely saddened by the death of Chara Soon.

He is not afraid to speak his mind to anyone, no matter how harsh or blunt it may seem, as sugar coating it would not make the situation any better. In some conversations, especially in the Super Robot Wars series, this has often raised a few questions to his teammates, and even doubts.

Judau is not very skilled in physical combat, but he is capable at sneaking around at times to avoid detection, though it is mostly in an environment he knows, such as the junkyard in Shangri-La. His real power comes in piloting a mobile suit. While sloppy at handling the Zeta Gundam initially, he improves over time and performs admirably with the ZZ Gundam. He also piloted other mobile suits such as the Hyaku-Shiki occasionally and defeated enemies his friends were unable to.

As a Newtype, his Newtype powers are said to rival Char Aznable's, according to Haman Karn. He is able to telepathically communicate with his sister over long distance, predict enemy's next move, and boost the power of the ZZ Gundam as well as create a barrier when triggered emotionally. During the Battle of Axis, several deceased Newtypes and Kamille Bidan lent Judau their powers, allowing him to combine the ZZ Gundam without the need for two more pilots and drastically enhance the output of the Gundam's high mega cannon.

At the young age of 14, he is a cheerful and optimistic boy who runs a junk shop in the colony Shangri-La in Side 1, and supports his younger sister, Leina, in place of their missing father, and mother who is away on a work trip. While scavenging for junk one day, Judau comes across the escape pod of Titans pilot Yazan Gable, who managed to survive the Gryps War. Discovering that the Argama was in port at the same colony, Yazan forcefully brings Judau and his friends along to help attack the ship. Judau breaks free from Yazan in order to steal the Zeta Gundam and sell it. He and his friends attempt this numerous times but fail, usually ending up saving the Argama instead from Yazan or Neo Zeon troops. They ultimately befriend the crew and join the AEUG, where they become known as the "Gundam Team", with Judau piloting the Zeta Gundam. Eventually, Judau receives the MSZ-010 ΖΖ Gundam from Anaheim Electronics and becomes its pilot.

Judau's mission eventually becomes personal when the Neo Zeon kidnap Leina. He often goes into battle against orders since he was so desperate to save his sister. During one of these attempts he infiltrated Axis, where he formally met Elpeo Ple, as well as having a first encounter with the Neo Zeon leader, Haman Karn. Ultimately Ple would defect to the AEUG thanks to her connection with him. Just before the Neo Zeon forces launched their formal invasion of Earth, Judau met Haman Karn again. Haman was intrigued by him, both because of his power and because he was trying to find someone else during the middle of a war. She invited him aboard, and they had a brief discussion. Haman tried to recruit him in the process, but failed when her men inadvertantly interrupted her. This would not be the last encounter that the two had; while Judau always refused Haman's attempts to recruit him, they also began to discuss their differing philosophies on life, causing Judau to at the very least develop a sense of sympathy towards her.

During the fighting in Dakar, he encounters Haman again. After a brief exchange, she shoots him in the shoulder, and grazes Leina with a bullet when she tries to protect Judau. This enrages Judau and causes his Newtype abilities to go wild, manifesting as a ghostly presence that terrifies Haman enough that she runs back to her room in tears, amazed at her own insignificance before his power. Later on in the same battle, it seems that Leina has been killed by a falling mobile suit, causing Judau to almost loose his resolve to fight. Ultimately he sensed that she was still alive and continued piloting, though everyone else began to suspect that he may have lost his mind. During the Colony Drop of Dublin, Judau witnessed the destruction of the city, and suffered another blow when Elpeo Ple sacrificed herself to save him from Ple Two and the Psycho Gundam.

When Glemy Toto declared his insurection, Judau and his friends used the Nahel Argama in order to take the fight to Neo Zeon. In the climactic Battle of Axis, Glemy Toto perishes at the hands of Roux Louka, while Judau rescues Ple Two. Later, Judau defeats Haman in a one-on-one Mobile Suit battle. Judau offers to let Haman come with him, but Haman rebuffs him and instead kills herself after she realizes she is surrounded by her enemies. As she died, she said that she was glad to have met "such a good kid". Judau is reunited with Leina, who was alive after all thanks to Sayla Mass. He and fellow pilot Roux Louka subsequently quit the AEUG and join the Jupiter Energy Fleet, heading to the planet Jupiter to start a new life.[1]

In the Gundam Evolve 10 animated short, while en route to Jupiter, Judau pilots the MSZ-010S ZZ-GR, and is assigned to protect/escort the space transport ship Jupitris II by Roux Louka on his birthday. While on the recovery mission he encounters Neo Zeon remnant forces pursuing a AMX-004 Qubeley Mk-II. Seeing the Qubeley posing no threat, Judau assists it in destroying the Neo Zeon squad composed of Doven Wolfs riding on sub-flight platforms, allowing the Qubeley to land safely on Jupitris II. The last scene reveals that the Qubeley was piloted by someone whose pilot suit resembles the one belonging to Ple Two, which may hint that she was a surviving clone like Marida Cruz.

Judau also makes an appearance in the Mobile Suit Crossbone Gundam: Skull Heart manga series by Yuichi Hasegawa. He pilots the Gump (a battle-worn ZZ Gundam in disguise), and goes by the alias Grey Stoke. He enlists the help of the Crossbone Vanguard members to prevent the Jupiter Empire from getting their hands on Amuro Ray's combat data which is embedded in the computer of an ancient Core Fighter, fearing that the latter would create a super weapon from it.

He re-emerges in the Mobile Suit Victory Gundam Outside Story by the same author. This time, Judau is just almost 20 years older and is still seen piloting the Gump and assists Uso Ewin in battling the Zanscare Empire. He is still involved with the Jupiter Fleet and is "leader" of the Jupitris-class Heinlein. He oversees the Dandelion colony, which is revealed to be populated by Newtypes, a number of which are in cold sleep. After successfully defending the colony with Uso and Kamui Gian from Scale Sarpris's attack, he leaves the Solar System with Kamui in the transformed interstellar spaceship Dandelion to Proxima Centauri, which would be colonized in U.C. 653. 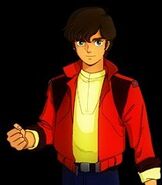 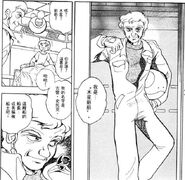 Appears as Grey Stoke in Victory Gundam Outside Story

Grey Stoke in a pilot suit 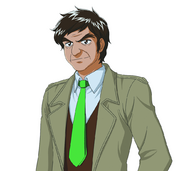 As seen in Gundam Diorama Front