Joint Front is the seventeenth episode of Gundam Build Divers.

The Build Divers members are wholeheartedly enjoying their new Force Nest, an environment so lavish that it rivals those of the most famous forces. Yukki voices his admiration for Riku, who has greatly improved as a Diver. But meanwhile, a new wish has formed within Yukki's heart.[1]

At the recently acquired island, Riku and Yukio show off to the other Build Divers the upgraded Force Nest the pair had designed. Previously, a simple beach house, it is now shaped like a boat, and contains a living-and-briefing room, an observation deck, as well as an underwater viewing room. There is also a new hangar and catapult behind a cliffside waterfall. As the Gundam 00 Sky, containing Riku, Sarah, Momoka and Molly flies by the Force Nest, Koichi finds its incredible how they have such a splendid place and Ayame replies this is thanks to everyone's hard work. Yukio agrees, pointing out the crucial role of Koichi's shuttle in the Lotus Challenge, and Momoka as well as Ayame's efforts in the flag battle. When Koichi tried to praise Yukio, the latter shrugs it off, focusing instead on Riku's growth in strength and Gunpla building. Feeling being left behind by Riku, Yukio visits The Gundam Base in the real world. As he eyes a Gunpla, Nanami appears, causing him to deny that he is buying a new Gunpla, and switches the topic to the new Force Nest. All this time, his hand is resting on a 00 Gundam Gunpla...

At the GBN lobby, Yukio seeks Magee's advice on how to become strong like Riku as he wants to contribute more to his Force. Delighted by Yukio's actions, Magee hugs the boy and suggests a mission. Yukio finds and selects "Mirror Mission" from the list displayed on the GBN Mission Information screen, he then thinks back to Magee telling him about the mission; although Magee refused to go into details, he disclosed that Tigerwolf, Shahryar and even Kyoya Kujo have benefited from the mission even though it's unpopular as the reward is simply a graduation badge, and shows off his own. As Yukio resolves to accept the mission, his hand bumps into Do-ji's. Surprised that the other is also interested in the same mission, the two squabble, accusing each other of being a copy cat. They are then interrupted by the arrival of Sarah and Molly. Sarah and Do-ji recognizes each other, but before they can say anything else, Molly floats over and accepts the mission for all of them. As the three Divers are teleported to the mission, the attendant informs them that if they retire, they can't re-enter the mission for a month.

Inside a cave, while Sarah and Molly gaze at a small fountain, Yukio mentions the ground rules for the mission – clear 4 challenges from Phase 1 to 4, then try the final phase. He's daunted by the fact that each phases' details will only be revealed at the last minute, but he's willing to try so he can get stronger. Sarah feels that Yukio's strong already, but he disagrees and says he needs to work harder to be like Riku. While Sarah is confused, Do-ji yells at them to stop chatting and get a move on or he is doing the mission by himself. Yukio points out that he cannot do that as the mission specifies that those who enter at the same time must try to clear it together. The boys argue again until Sarah and Molly indicate their interest in clearing the mission with them. As Yukio, Sarah and Molly walk towards Do-ji, the Crystal Phoenix watches them.

The first phase leads them to a countryside filled with cherry blossoms where they battled against NPD monsters and test their own abilities. As Yukio and Do-ji attack the Oni Zakus and Oni Doms in the GM III Beam Master and the Geara Ghirarga, Sarah plays games like rock-paper-scissors and tic-tac-toe with Dragon Baby. The three are victorious, though the boys are winded by the fight and laments their near loss, with Do-ji concerned about Ogre's reaction if he sees him now, and Yukio feeling that Riku would not struggle as much. As they travel through the cave to Phase 2, Yukio pumps himself up and restates his determination to overcome the upcoming challenges. Hearing this, Sarah appears concerned. Phase 2 is revealed to be a baseball-themed event, surprising the group. While evading the barrage of baseballs from a baseball player-themed GN-000 0 Gundam, Yukio questions the link between this and getting better at Gunpla Battle. He then closes his eyes in fear as a ball flies towards him. However, Do-ji intercepted the ball and reminded Yukio that they would not get hurt in GBN, getting the latter back on his feet. While the boys catch the baseballs, Sarah and Molly cool off at a water fountain.

The tired boys became more annoyed when Phase 3 turns out to be a puzzle rings-solving event. This time it is Do-ji's turn to complain about the link with Gunpla Battle. He tries to solve the puzzle rings by pulling at them with force, but Yukio explains that one have to think outside the box for these kinds of puzzles. Phase 4 is an obstacle course in a winter-like setting, and again, both boys could not see the link to Gunpla Battle. As the group cross a narrow bridge over icy water, Sarah slips and falls, but the boys catch and pull her up, only to fall in themselves. The two flail in panic as they cannot swim, but soon stop and laugh at themselves when they realize the water is quite shallow.

As the boys dry off amid a timeout-like Water Penalty, they talk about why they enter the mission. Do-ji divulges that his brother, Ogre, had tried the mission before, and is building a new Gunpla to become stronger and enjoy even 'tastier' battles. He adds that Ogre is continuously honing himself and his Gunpla for the ultimate battle, despite being very strong already. He then explains that he joined GBN as he admired Ogre and wanted to catch up to him. However, he never seems to catch up no matter how hard he tries, even resorting to a Break Decal is pointless. Despite this, he is not giving up on being stronger. Yukio empathizes, and noted his situation is the opposite; he was the one who had taught Riku about Gunpla, but he now feels being left behind as Riku kept growing. As the boys finds a kindred spirit in each other, Sarah says their friends are actually aware of their feelings and are rooting for them. The trio then introduce themselves to each other properly, and Do-ji awkwardly apologizes for the bad things he had done in the past, like the Break Decal incident. When Yukio and Sarah stare at him in silence after the apology, Do-ji quickly changes topic and suggests he and Yukio switch their fighting style to accomplish their goals: for Do-ji to be useful to Ogre and for Yukio to be like Riku. Yukio agrees. Contrary to the excitement the boys have about their plan, Sarah and Molly are uneasy about it.

The final phase is a Gunpla Battle where they must use what they have learned so far, and the opponents are black color version of their Gunpla. Resolving to use their new fighting styles, Do-ji takes up the GM III Beam Master's Changeling Rfile while Yukio arms himself with a beam saber. However, unfamiliarity with their new fighting style caused them to struggle against their opponents, even though they offer tips to each other during the battle. Do-ji has a strange feeling that he is fighting against himself, and Yukio realizes that the opponent might be stimulating their past battle tactics, supporting Do-ji's hunch. Meanwhile, Sarah meets with a dark, expressionless copy of herself, who asks her who she is. As their hands touch, the copy disperses and, suddenly, various warnings appear on the enemy Gunplas and they merge into a custom black version of the Norm Gather. The Norm Gather attacks Sarah, but Do-ji rushes in to stop the attack with the Ghirarga Ghiratail, tossing the Changeling Rifle back to Yukio in the process. The boys revert to their original fighting style, and Yukio discovers his shooting accuracy have improved. He recalls the mission's Phase 2, and noted improvements in his dynamic vision and reflex speed as well.

Do-ji tells Yukio to take out the enemy's tentacles while he attack the main body, and Yukio accedes to the plan. When Do-ji goes for the kill, he initially thought the large eyeball is the weak point, but he recalls the mission's Phase 3 and realizes it might be a decoy. He then runs an analysis on the enemy, and finds its weak point is on its underside. Anchoring the Ghirarga Ghiratail in the large eyeball, Do-ji swings the Geara Ghirarga under the enemy and blasts through it using the beam buster. The system returns to normal, and the Norm Gather splits back into the two black Gunplas that then explode. With victory in their hands, the two boys realize they can learn a lot by examining themselves and that they need to stick to the battle style they believe in. The Crystal Phoenix then lands before them, take a look at Sarah and flies off.

At the GBN lobby, the other Build Divers are surprised to see the trio together. Yukio tells them the trio have cleared the mission together, adding further to their puzzlement, but Magee who is also there has a knowing smile on his face. Do-ji walks up to Riku and apologizes sincerely for tricking him into a fight during their first meeting and for the use of Break Decal, and promises not to fight shamefully again. After that, he declares that no matter how strong Riku becomes, Ogre will always be stronger. Riku replies that he won't lose either. Do-ji then reminds Yukio on the lesson they learned, and bids his new friends farewell. In the real world, Koichi comes across Yukio working on a new Gunpla in The Gundam Base. Yukio explains he is building a Gunpla with which he can improve his battle style further, so that he can be as strong as Riku and looks at a box of HGUC RGM-89 Jegan.

At the GBN Administration headquarters, Game Master is shocked by a bug appearing in the Mirror mission server. Although the bug's effects are minimal and there is no reports of damage to the system, he feels that the repeated occurrences cannot be ignored and orders a close watch on the situation. 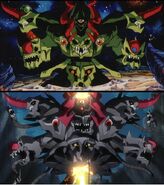