Johnny Ridden (ジョニー・ライデン, Jonī Raiden?) was a character introduced in Mobile Suit Variations. He was a Principality of Zeon ace pilot active during the One Year War nicknamed "Crimson Lightning".

Born in U.C. 0056, Johnny Ridden was a third-generation descendant of immigrants from former Australia, and has a British-American heritage.[1][2] At age 22, he completed his higher education and volunteered to join the Zeon National Defense Force.[3] After undergoing training, he was assigned to the Mobile Assault Force as a mobile suit pilot.[1]

During the One Week Battle, he held the rank of Sergeant Major and piloted a MS-06C Zaku II Early Production Type. After sinking three battleships during the Battle of Loum, he was promoted to Captain and switched to a MS-06F Zaku II. He had the Zaku painted in what would become his trademark crimson and black colors. As a result, his mobile suits were often confused with the red mobile suits piloted by Char Aznable.[1]

Later, he was promoted to Major and switched to the MS-06R-2 Zaku II High Mobility Type.[1] He became the commander of the Mobile Assault Force 2nd Army's Special Service Company, and undertook many missions to intercept Federation supply fleets. However, his time piloting the MS-06R-2 was relatively short, as he was soon recalled to Granada, where he was reassigned to the Chimera Corps, an ace unit equipped with the latest MS-14 mobile suits. At the Chimera Corps, he piloted both the MS-14B Gelgoog High Mobility Type and the MS-14C Gelgoog Cannon.[2]

As leader of the Chimera Corps 1st Squadron, Johnny Ridden participated in the Battle of A Baoa Qu with the rest of the Corps. He was declared missing in action during the battle and posthumously promoted to Lieutenant Colonel.[4]

Since there exist many different works detailing Johnny Ridden's backstory and/or his fate after the One Year War, most of which are contradictory in nature, they are listed here separately.

The Brave Soldiers in the Sky

Johnny Ridden was the son of a Zeon senator. During his childhood, he learned about the story of the unicorn from his grandfather: its horn has the power to bring people happiness, but it only accepts virgin maidens who are pure of mind. His granfather also gifted him a handcrafted unicorn medallion.

In U.C. 0071, when the Zeon military was forcibly seizing civilian properties, a 15-year-old Ridden tried to assist a man who was involved in the protest. Other soldiers started heckling Johnny until he was saved by a young Kycilia Zabi. The two later met again at a ball, where Kycilia invited Johnny to a dance and told him that not all Zeon soldiers were like the ones who beat him, and that there were many good people willing to risk their lives to protect Side 3 in the military.

Apparently inspired by Kycilia's words, Johnny Ridden joined the military in U.C. 0078, becoming a mobile suit pilot serving under Kycilia. During the Battle of Loum, he sank three Salamis-class cruisers before Kycilia, unwilling to lose more men when the battle was already decided, gave the order to retreat. After the battle, he repainted his Zaku in crimson and black, and adopted a personal emblem prominently featuring a unicorn to symbolize his loyalty to Kycilia.

On October 15th, U.C. 0079, a Federation fleet carrying the first six RGM-79 GMs produced departed from Jaburo for Luna II, with the intention of testing the GM in space and eventually establishing a mobile suit production plant at Luna II. However, Johnny Ridden, piloting his High Mobility Zaku, hid in a piece of colony wreckage and ambushed the fleet, destroying its escorts and capturing the GMs almost intact. After the success of this operation, Kycilia congratulated him personally, saying that she admired him.

Eventually, Johnny became the leader of the Chimera Corps and switched to a High Mobility Gelgoog. After the fall of Solomon, he gifted his unicorn medallion to Kycilia before departing for A Baoa Qu. Kycilia tied the medallion to her gun, and ended up losing it after shooting and killing Gihren Zabi.

As the Battle of A Baoa Qu raged, Johnny's Chimera Corps teammates fell one by one. In order to cover the retreat of Kycilia's Zanzibar, he stood alone against countless GMs and Balls from the Federation, unaware that Kycilia had already been killed by Char Aznable. After the battle, he was declared missing in action, with his ultimate fate unknown.

Episode 9 of Gundam Evolve, which is set during the Gryps War and focuses on a trio of Zeta Gundam pilots belonging to Karaba. In the episode, it is mentioned that the Zeta Gundam nicknamed "Red Zeta" was originally piloted by someone named "Johnny", a former Zeon pilot turned freelancer who has since retired[5] due to the side effects of taking drugs, apparently in an attempt to make use of the Red Zeta's Newtype-use system, the Psycho Neutralizer.[6]

In Gundam MS Graphica, Johnny returns to action as the freelance mercenary "Lightning" in U.C. 0097. It is also mentioned that he fought during the One Year War, further hinting that Johnny is, in fact, Johnny Ridden.

Contrary to official records, Johnny Ridden did not join the military voluntarily. Instead, his father filled in the applications for him, believing that, being the direct descendants of the first immigrants to Side 3, it was their duty.

Despite being a peace-loving man who hated the military and the Zabi family, Johnny proved to be a surprisingly good pilot at the military academy. In his first actually combat sortie during the One Week Battle, he attempted to get out of the war by painting his Zaku red, thus making it stand out from the others and more likely to be shot down (but because of the lack of paint, only the backpack, shoulders, and torso were painted red).

During the battle, he tried to get himself shot down by charging straight into the Federation formation at full speed, but his plan failed when the Federation soldiers panicked upon seeing a mobile suit for the first time, causing them to be easily shot down. The same thing happened at the Battle of Loum, causing him to be promoted and earn an unwanted reputation as an ace pilot. After switching to the MS-06F, he kept the same crimson and black coloring, still hoping to be shot down.

After speaking out against the Zabi family at a public event, he was reassigned to intercept Federation supply routes to Luna II as punishment. At this point, he switched to his most famous machine, the MS-06R-2 Zaku. However, at this point, the Federation successfully developed the RGM-79 GM, a mobile suit capable of using beam weapons, rendering mobile suits that cannot use beam weapons, like the Zakus, obsolete.

During the Battle of A Baoa Qu, Johnny deployed in the Gelgoog High Mobility Type. According to official records, he never returned. In truth, however, after losing his Gelgoog to the FA-78-1 Full Armor Gundam, he switched to the "Full Bullet Zaku", a mobile suit designed to combat the Gundam's Luna Titanium armor through sheer weight of firepower. After a fierce battle, Johnny was able to destroy the Full Armor Gundam by sacrificing his Zaku. Though he was able to survive, he was left helplessly drifting in space and was declared MIA.

In U.C. 0082, Johnny, now under the pseudonym of "Johnny Depp", retired to Australia and used a modified Zaku I called Land Zaku to help a village with farming. However, his peaceful life was interrupted by the visit of a disguised Shin Matsunaga, who wanted to enlist his help in fighting the "ghost of the Principality of Zeon" in space. Johnny refused, no longer wanting to fight. However, the village suddenly came under attack by Zeon remnants piloting three Dom type MS, who claimed that they are the "True Principality of Zeon Council" led by Dr. Q, and demanded the villagers hand over all supplies, giving them one day to prepare. On the next day, Johnny hastily painted his Land Zaku red by squeezing several barrels of red paint on top of it. After defeating the three Dom type MS singlehandedly, Johnny headed for space with Shin in order to defeat Dr. Q.

Johnny and Shin broke into Dr. Q's factory ship, which was on a course for the Republic of Zeon in Side 3. There, they encountered the Perfect Zaku piloted by Dr. Q, which easily overwhelmed the two and headed for Side 3 on its own. At Side 3, the Perfect Zaku wiped out the Federation garrison in an instant, including a FA-78-2 Heavy Gundam. However, Johnny and Shin were able to deduce the secret to its apparent invincibility: it was protected by both a beam dispersal field and Luna Titanium armor, rendering it invulnerable to both beam weapons and solid rounds. After Shin blew away the beam dispersal field with bazooka rounds, Johnny was able to shoot the Perfect Zaku with a modified beam rifle at point blank range, destroying it and killing Dr. Q.

At the request of Johnny, Shin "killed" Johnny Ridden by destroying his Zaku, finally allowing him to leave the battlefield for good. He then retired back to his home colony in Side 3, reuniting with his lover, Tiki Tournia.

MSV-R established that Johnny Ridden piloted a custom MS-06S Zaku II Commander Type before he switched to his iconic Zaku II High Mobility Type. Contrary to the description in MSV, MSV-R stated that Ridden adopted his crimson personal color after he achieved various battle results in his MS-06S.[7]

Johnny Ridden's complicated history and true identity are the main focus of the manga MSV-R: The Return of Johnny Ridden, which explains the many vastly different accounts of Johnny Ridden's history as the result of multiple people claiming to be Johnny Ridden after the war, as well as fictional accounts being mistaken for reality. One of the central conflicts of the story is whether or not Led Wayline, a newly introduced character who works at the Federation Survey Service, is actually an amnesiac Johnny Ridden.

In MSV-R: Rainbow's Shin Matsunaga, Johnny Ridden was ordered by Kycilia Zabi to arrest Shin Matsunaga, who was sent by Dozle Zabi to Side 3 in order to request reinforcements from Sovereign Degwin Sodo Zabi. Piloting his custom Gelgoog High Mobility Type, Ridden quickly destroyed Matsunaga's MS-06FS Zaku II and captured him, but Matsunaga later escaped. The two later dueled again, with Matsunaga piloting a custom MS-14Jg Gelgoog Jäger, but the duel was interrupted by Degwin's royal guard before it could finish. 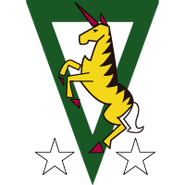 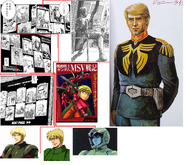 Ridden vs Uma Lightning during One Year War as seen on MSV-R: The Return of Johnny Ridden

Johnny Ridden on the far left on Gundam Pilot Series of Biographies: The Brave Soldiers in the Sky

Another MSV comic, focusing on Ridden.

Various potential Riddens as seen on MSV-R: The Return of Johnny Ridden

Johnny Ridden as seen on Gundam Pilot Series of Biographies: The Brave Soldiers in the Sky 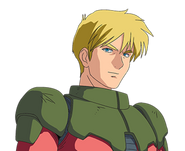 As seen on Super Gundam Royale