He commanded the EFSF during the Battle of Loum, where the Earth Federation managed to halt an attempted colony drop and inflict major losses on the Principality of Zeon, but failed to prevent the destruction of Side 5 or their own major losses. Revil's own flagship, the Ananke, was destroyed and he was taken prisoner by the Black Tri-Stars. Following the battle, the Federation and Zeon entered into peace talks, with the Federation planning to surrender.

During these negotiations, Revil— aided by Federation agents and Zeon defectors— escaped from Zeon custody and returned to the Federation. There, he gave his famous "Zeon is exhausted!" speech, where he detailed the poor condition of Zeon's military that he witnessed during his capture. This resulted in the Federation rejection of the terms of their surrender, although both sides agreed to a ban on nuclear, biological, and chemical weapons by signing the Antarctic Treaty.

Revil takes charge in Operation Odessa, whose purpose is to defeat the Zeon's mining facilities in Eastern Europe. During the lead up to this battle he has Lt. Matilda Ajan provide White Base with upgrade modules for the RX-78-2 Gundam. After the Federation's victory, he meets the White Base crew in person for the first time. White Base then follows him to Belfast, Ireland, where Revil provides White Base with its next orders.

Following his return to space, Revil's fleet met in secret with Sovereign Degwin Sodo Zabi to negotiate the terms of a Zeon surrender. Unfortunately, while both were mediating a peace, Gihren Zabi's ambition got the best of him and he ordered Zeon's Solar Ray weapon to fire at the rendezvous point, killing Revil and Degwin, and eliminating most of Revil's fleet. With the loss of Revil and his command ship, the Phoebe, the remaining Federation ships in the Revil fleet regrouped around White Base and Luzar before launching the last attack of the One Year War: the Battle of A Baoa Qu.

By the Third Neo Zeon War, the second Dogosse Gier-class battleship was named the General Revil in his honor. [3] 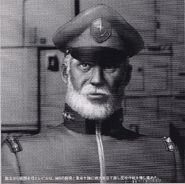