Job appears to be fairly emotionally stable and not as prone to emotional moments as characters such as Amuro Ray and Hayato Kobayashi. He is loyal, but somewhat lacking in acute awareness.

Job makes frequent appearances among the crew and frequently interacts with the primary characters. He prominently shown in all shots where the full crew is assembled. He also makes frequent appearances performing various roles throughout the ship and has voiced dialogue comparable in volume to the bridge operators, though less of it being in the form of status reports.

His first major appearances are near Luna II. Despite the fact that he wears a Federation uniform, it is likely that he was a civilian living on Side 7 as he was never addressed as a potential candidate as a mobile suit pilot, nor addressed as a cadet as with Ryu Jose and Hayato.

He initially fields as a pilot of the Gunperry along with Ryu during the brief cease fire with Garma Zabi when they— along with Amuro, Kai and Fraw Bow— "crash land" the Gunperry in an effort to discretely unload the fleeing civilians. When Sayla Mass first sortied he was shown as manning the hangar controls and reveals that he had assisted in her launch believing she had orders. When Ramba Ral boards the ship he is seen with a pistol prepare to intercept incoming troops. After the death of Ramba Ral, Crowley Hamon returned to avenge him, and Job briefly piloted the RX-75-4 Guntank before it was upgraded to a one-pilot mobile suit.

He later serves as a guard for the central hangar when two Zeon spies come aboard the ship, believing them to be civilians, he follows orders to guard them while their plane is repaired and not allow them access to sections outside the room adjacent the hangar. Later in the same episode he is confirmed to be an alternate pilot when Kai Shiden asks why he isn't manning the Gunperry, the response being that he is preoccupied manning a turret. Job's last major appearance was when the White Base crew was receiving orders at Jaburo.

In U.C. 0095, Job John is working at a Mobile Suit factory near the wreckage of the Fifth Luna meteor attack in Lhasa, Tibet, where he is the first person Kikka goes to talk to about Amuro after receiving the Address List from Kai.

By U.C. 0120, Job had become a senior engineer at SNRI. He was responsible for the Formula 90 project, which had been chosen as the Federation's next generation mainline mobile suit.

On U.C. 0120, October 18th, Job visited the Admiral Tianem, the flagship of the 13th Experimental Battle Group to check on the Gundam F90's test run. After learning that the F90 Unit 2 was captured by unknown enemies, Job remarked that he still got good data from the incident. He then returned to Earth to speak with SNRI's main office on an urgent matter.

Job shouting to Amuro during Ramba Ral's invasion of the White Base.

Job guarding Flanagan Boone (offscreen) and Carioca during their infiltration.

Job seen in a normal suit with Bright and Mirai directly after Flanagan Boone's failed attack on the White Base in the Mobile Armor "Grublo". 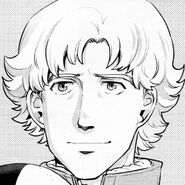 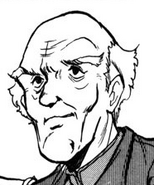 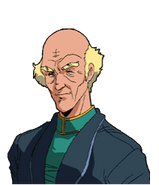