Jimba Ral (ジンバ・ラル, Jinba Raru?) is a character from the Mobile Suit Gundam: The Origin manga and its OVA adaptation. He is the father of Ramba Ral.

He was a paranoid old man entrenched in hatred of the Zabis.

After the death of Zeon Zum Deikun, his children Casval Rem Deikun and Artesia Som Deikun escaped from the Autonomous Republic of Munzo to Earth with the help of Jimba. They spent several years living a life of luxury as wards of the aristocratic Don Teabolo Mass, who gave them the surnames Édouard Mass and Sayla Mass and treated them as his own adopted children.

Jimba Ral constantly reminded Édouard of the Zabis' betrayal of the Deikuns, with Sayla hating him for this. After narrowly escaping an attempt on their lives by assassins (in which Jimba Ral was stabbed to death), they fled to Texas Colony. 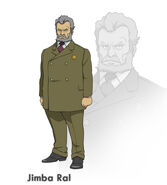 Jimba Ral in the anime adaption of Gundam: The Origin.

Retrieved from "https://gundam.fandom.com/wiki/Jimba_Ral_(Origin)?oldid=464896"
Community content is available under CC-BY-SA unless otherwise noted.