The Jet Fan Helicopter is a transport aircraft that appears in Mobile Suit Gundam SEED Destiny.

A dedicated VIP transport aircraft, it was equipped with two large VTOL engines and was capable of vertical takeoff and landing. The boarding hatch on the side of the fuselage is used as a ramp for boarding and alighting when deployed. It has a capacity of 10 passengers, including the pilot and co-pilot. 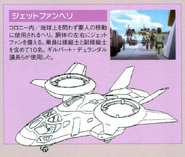