Jenos Crisis(ジェノス・クライシス) is a fictional character from the After War Gundam X anime.

The leader of a small band of Vultures, instead of salvaging from the ruins for technology he commands his small band of mobile suits to attack small towns. After destroying the defenses of the towns he raids them for any food, money, or technology that they have. He continues this every harvest season, commanding his group from a small command jeep.

His raiding is put to an end when he comes to the area close to Witz Sou's home, as the Gundam pilot uses his GW-9800 Gundam Airmaster to destroy the mobile suits under Jenos's command. Holding the Vulture leader at gun point, he orders him to leave and never return.Both the internationally group and nations in the position have been charged of doing very little in the cause up to this problems. Moreover, awesome meals costs have pressured meals out of range

of many people, while issue in food crisis  has improved the scenario. 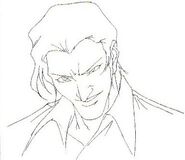 Retrieved from "https://gundam.fandom.com/wiki/Jenos_Crisis?oldid=349489"
Community content is available under CC-BY-SA unless otherwise noted.