Duvall is capable leader who became an officer in the Principality of Zeon Forces after working as a test pilot at Zimmad for 12 years.

The 603rd Technical Evaluation Unit is put in charge of testing the EMS-10 Zudah with the help of Duvall. However, the testing soon goes wrong after a fellow test pilot is killed when his Zudah lost control and disintegrated during combat simulation. To add insult to injury, the Jotunheim crew is shocked to learn that the Federation already knows the Zudah's shameful background — it is nothing but a cosmeticized version of the failed project that previously lost the bid to YMS-05 Prototype Zaku I due to a lethal design flaw. The Zudah is doomed to lose all honor and become a ghost fighter. As the Jotunheim responds to the distress call of orbit-drowning Zeon forces retreating from Odessa, the disgraced Duvall sorties in Zudah to engage the incoming Federation forces in order to prove its worth (and also his) one last time.

A squad of GMs open fire on the Jotunheim. Duvall tells Monique Cadillac and Hideto Washiya to continue the rescue efforts while he engages the GMs. Duvall surprises the GM squad and destroys two units. Duvall then flies around the four remaining GMs and leads them away from the H.L.V.s. Oliver May tells Cadillac to bring back Duvall and keep an eye on her engine. Duvall pushes his engine to the limit, forcing the GMs to push themselves to the limit to keep up. One of the GMs falls back due to engine problems, but Cadillac destroys it. In his last words, Duvall tells the Jotunheim no matter how much he's yelled at, he won't feel disgraced. He says the Zudah is no longer a ghost fighter and was able to fight in a battle and prove it existed. Cadillac reaches her engine limit and shuts it down. The three remaining GMs overload and explode. Soon after, Duvall's Zudah breaks apart and explodes in the atmosphere. 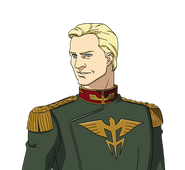 Retrieved from "https://gundam.fandom.com/wiki/Jean-Luc_Duvall?oldid=431135"
Community content is available under CC-BY-SA unless otherwise noted.