Jay Null, better known by the alias Doctor J (ドクターＪ, Dokutā J?), is a supporting character from Mobile Suit Gundam Wing. He is the engineer and creator of the titular Wing Gundam, and mentor of the protagonist Heero Yuy. His distinguishing features include eye lenses, leg braces and a prosthetic left arm.

Doctor J is arguably the most eccentric of the Gundam engineers and if often heard making unusual remarks. He shares an avuncular relationship with Heero (it was he who chose Heero's codename) and is very much devoted to destroying his enemies, most notably OZ.

Like the other Gundam engineers and Howard, Doctor J was a gifted engineer as evidenced by his work developing the OZ-00MS Tallgeese, the Wing Gundam, and other machines. In addition, his expertise in robotics enabled him and the other scientists to sabotage Bulge's functions upon capture and install a glitch in Libra's main cannon which caused damage to the structure every time it was fired.

Doctor J was one of the scientists who designed the Tallgeese, but left after the Alliance began oppressing the colonies. The scientists were contacted by Dekim Barton to construct the Gundams for retaliation against the Alliance. However, all the scientists disagreed with Dekim's plan called Operation Meteor.

Early in life he was a university friend of the original Heero Yuy and Tomas Quarant, the elder brother of Quinze. Involved with anti-Alliance activities, he lost his arm as a result of a bomb planted by the Alliance. He helped create the Wyvern, a mobile armor that contained an early form of the ZERO System, in order to aid Princess Katrina Peacecraft to battle for the Sanc Kingdom.

Quirky but affable, Doctor J was immensely proud of Heero's abilities and encouraged the young man to choose his own fate. However, when Heero felt guilty over killing a girl and her dog while destroying an Alliance base, Dekim ordered Doctor J to retrain Heero; J agreed but feared that the real Heero Yuy would not like it if his namesake lost his humanity.

His men saved Relena Peacecraft from an OZ hit-squad and he told her about Heero's past before helping her return to Earth.

Doctor J was reunited with his fellow scientists when they were all apprehended by OZ. Lady Une demanded that they construct mobile suits more powerful than the Gundams. The scientists complied by creating the Mercurius and Vayeate.

While in confinement on the Lunar Base, the scientists and pilots had their air shut off by Tubarov, who considered Une's decision to keep their enemies alive irresponsible. However, Une returned just in time to set them free. Caught in a new power struggle between the Treize Faction and Romefeller, the scientists then met with Heero and Quatre, explaining the complexities detailing the ZERO System, which was what caused Quatre to go berserk. Romefeller discovered them and tried to test out the ZERO system on the Wing Zero, piloted by Heero, however the system caused him to go on another rampage.

The scientists were later captured by White Fang, who were lead by Quinze (and then Zechs Merquise), to assist them in completing the battleship Libra and reconstructing the Mercurius and Vayeate as mobile dolls. However, they secretly made the former's cannon incapable of firing consecutively.

During the final battle, the scientists were found by Duo Maxwell. They had him take them to Peacemillion, which had crashed onto Libra's main cannon, where they would rewire its engines to prevent it from falling to Earth. Once they had finished their preparation, they were confronted by Quinze, who berated them for changing Operation Meteor. Doctor J was presumed deceased alongside the other scientists and Quinze in an explosion that was trigged when they re-activated Peacemillion's engines to propel Libra way from Earth. However, in later works he was shown to still be alive. 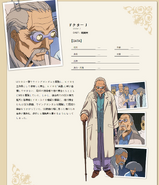 A young Heero Yuy talks to Doctor Jay Null about the revival of 'Sam', the first ZERO System (Frozen Teardrop). 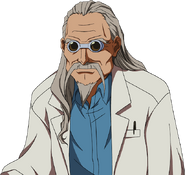