A Zeon captain and secretary to Col. Douglas Rodin during the One Year War, she was actually sent by the Zabi family to observe Rodin. In truth she was a double-agent, formerly a fearsome mobile suit pilot with the Oni MS corps under Kycilia Zabi, which was composed of pilots configured to become Newtypes through human experimentation. 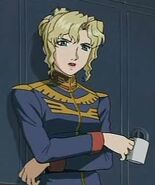 Add a photo to this gallery
Retrieved from "https://gundam.fandom.com/wiki/Jane_Conty?oldid=192999"
Community content is available under CC-BY-SA unless otherwise noted.