Jamitov Hymen (ジャミトフ・ハイマン, Jamitofu Haiman?) is a fictional character from the anime series Mobile Suit Zeta Gundam and Mobile Suit Gundam 0083: Stardust Memory. He is the mastermind behind the foundation and rise of the Titans, the elite organization of the Earth Federation Forces. From his perch at the pinnacle of the Earth Federation's military command structure, Jamitov uses the Titans as a private army to further his own scheme for world domination. Cruel, devious, and utterly amoral, Jamitov will stop at nothing to impose his own brand of Earth-supremacist ideology on the suffering peoples of the space colonies.

A member of the Earth Federation Forces. Jamitov plays a small yet crucial role during the events of Operation Stardust. An aide to Admiral Gene Coliny, Jamitov manipulated the crisis to his own benefit; by hindering EFF efforts to stop the Delaz Fleet's colony drop, Jamitov created a pretext for both the ouster of Vice Admiral John Kowen and the formation of what would be known as the Titans.[1]

Jamitov Hymen is the leader of the Earth Federation's counter-insurgent organization known as the Titans, which were formed with the stated purpose of eliminating the remnants of Zeon in light of the events that took place during the One Year War and Operation Stardust. However, that is just a smokescreen for their true ambition to dominate the Earth Sphere. Jamitov first appeared when he met with Bask Om on Gryps to discuss the AEUG attack on Jaburo and the fortification of Gryps. In order to help him maintain control, he summons Paptimus Scirocco, a powerful Newtype known as "the man from Jupiter". Although Scirocco pledged his loyalty by signing a contract with his own blood, Jamitov and Bask still have misgivings about bringing him on.

At the first meeting in Dakar, Jamitov deviously arranges the assassination of AEUG leader Blex Forer allowing him to convince the Federation Council to hand over full control of the Federation Forces to the Titans. He later appears at the Titans headquarters in Kilimanjaro right when it is under attack by the AEUG and Karaba. Jamitov personally observes an experiment where they try to determine if Cyber-Newtype Four Murasame can use the Psyco Gundam to its full potential, but the psyco waves prove too much for her, which he finds very disappointing. Sensing Four's pain, Kamille Bidan wanders deeper and deeper into the base with Char Aznable close behind. They run into Jamitov and Char quickly tries dispatching him in order to avenge Commodore Blex, but Jamitov escapes saying that he overestimated Char. Although the AEUG and Karaba eventually overwhelm the Titans and destroy their base, Jamitov successfully launches back out into space.

Later at the Gate of Zedan, Jamitov prepares to meet with Haman Karn, the leader of Axis Zeon. He discusses this meeting with Jerid Messa and entrusts him with a device to use in the event that Haman tries to pull off any stunts. When they meet, Haman tells Jamitov that as they speak the Axis asteroid is headed on a collision course with the Gate of Zedan. Jamitov asks what she wants and Haman boldly admits that the only thing she came for was his life. Jerid tries to shoot her with the device that Jamitov gave him, but Haman dodges the shot and grabs hold of her earring, saying that it is filled with enough cyanide to kill every person in the room. As she leaves, Haman releases the gas but Jerid seals himself and Jamitov in a secret compartment to avoid it. Later the Axis asteroid does indeed collide with the Gate of Zedan, but not before Jamitov and Bask evacuate with most of their forces intact.

In his last appearance, Jamitov attends a conference with Haman and Scirocco. He reprimands Scirocco for failing to show up at the Gate of Zedan when it was being destroyed, but doesn't go any further than that, even though he still doesn't trust Scirocco. During the conference, Scirocco says he agrees with Haman about how people "whose souls are weighed down by Earth's gravity" are hardly fit to lead in outer space, irking Jamitov despite his claims of loyalty. Scirocco pulls a gun on Haman, but Char shoots him first, grazing his arm. Sensing the danger, Sarah Zabiarov blasts through the conference room with her Bolinoak Sammahn, sending everything into disarray. Jamitov and Scirocco are the only two people left in the remains of the conference room. Scirocco confidently takes this opportunity to kill Jamitov and blames Haman for it. 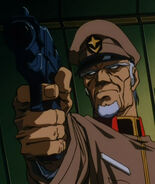 Jamitov Hymen as seen in Gundam 0083

Retrieved from "https://gundam.fandom.com/wiki/Jamitov_Hymen?oldid=440543"
Community content is available under CC-BY-SA unless otherwise noted.