Jamil Neate was a Newtype pilot for the United Nations Earth during the 7th Space War, and piloted a GX-9900 Gundam X. Using his Newtype abilities he was able to control a number of pilotless Gundams modeled after his own called GX-bits with the Flash System. Jamil became known as an ace pilot for the UNE, meeting his adversary Lancerow Dawell from the Space Revolutionary Army again and again in combat. On the final day of the war he was given an order to destroy one of the space colonies that was starting to move, using the Satellite Cannon of his Gundam and those of the GX-bits he was able to score a direct hit on the colony, thus starting the chain of events that led to the massive colony drop on Earth by the SRA. Jamil and Lancerow continued to duel as the colonies fell, until both of them disabled the others' Mobile Suit. Both pilots were injured in the battle, and lost their Newtype abilities as a result.

With his Gundam X damaged he somehow made it back to the Earth, with the loss of many of his Newtype abilities and powers and development of Cockpit Phobia, he started a career as a Vulture, becoming the captain of the Freeden. After finding out about Tiffa Adill he rescues the girl and starts a quest to find other Newtypes to prevent them from being used like he was as a boy, his quest to do so forcing him to get over his cockpit phobia and pilot the Gundam X Divider in place of Garrod Ran on some missions, determinately replacing the boy as the machines pilot with the capture of the Gundam Double X.

When Tiffa is kidnapped by Nicola Fafas and taken to space, he arranges for Garrod to be taken up along with the New United Nations Earth military Gundam, the GX-9901-DX Gundam Double X, on a ship captured by SRA spies. When the ship was to take off it comes under attack by a large New UNE land battleship sent to stop the ship from launching. Using the power of the three Gundams under his command and his own ship, he is able to help Garrod and the SRA spies escape into space, but not before he and the entire crew of the Freeden is captured and sentenced to death as traitors to the New UNE. Jamil and the rest of the crew is rescued by Carris Nautilus on the way to their execution, the group given back their Gundams as well before going to a base occupied by Carris forces and meeting up with Garrod, Tiffa, and Pala Sys. Taking the new space warship made by the New UNE, with help from Carris again, the newly named Freeden II launches to head towards the moon under Tiffa's guidance.

Reaching the moon and protected by D.O.M.E., the strange being explains what a Newtype is to Jamil and everyone summoned by him, changing the way that he thinks and feels about the things he had done in his past. Upon leaving the moon he joins forces with his old rival and now friend Lancerow to fight the forces under the command of the Frost brothers, helping to end the 8th space war quickly.

Jamil gives up his life as a Vulture captain and joins the New UNE along with his former first officer Sala Tyrrell, both working to bring peace to the world along with Lancerow and the SRA. 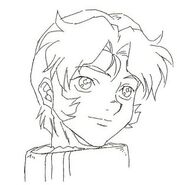 Jamil Neate without his sunglasses (from Gundam X TV series) 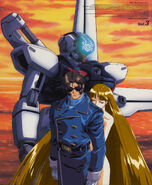 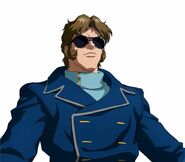 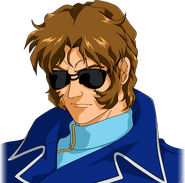