Jack Bayard (ジャック・ベアード) (also Jack Baird), popularly known as Jack The Halloween, was a character who first appeared in Gundam the Ride - Space Fortress A Baoa Qu (an attraction at Fuji-Q Highland in Japan) and in the film Gundam Neo Experience 0087: Green Divers as well as a number of art books. He has also played major roles in many Gundam-related video games.

Jack would join the Earth Federation Army as an officer cadet in U.C. 0077 and was sent to the Earth Federation Officer School. He graduated on U.C. 0079 and was commissioned as a Lieutenant. During the One Year War in U.C. 0079, the Earth Federation Forces enact a training program for soldiers in the regular army to become mobile suit pilots. Jack, also being one of these new MS pilots, displayed excellent technical aptitude and piloting skills. On December 20 of the same year, Jack was promoted to Second Lieutenant and later served alongside Adam Stingray on the Fuji-class transport ship Suruga, where he was captain of an MS squad and first received his own MS, an RGM-79 GM emblazoned with his personal "Jack-o'-lanterns with a sickle" emblem and would come to be known as "Jack The Halloween". On December 24, Jack is deployed for first the time in actual combat to participate in the EFF's Operation Cemballo to attack the space fortress Solomon. During the Battle of A Baoa Qu, Jack and his subordinate Adam escorted the Suruga's Escape Launch. However, he is unable to find a safe escape route in the chaos of the battlefield, and is forced to enter the fortress. While doing so, he discovered a Mini Solar Ray hidden in the center of the fortress. They attempt to destroy it, but are attacked by an enemy MS. Adam grabs the enemy to protect Jack and the Escape Launch, and is engulfed by the Mini Solar Ray's explosion. The explosion sends Jack's GM and the Escape Launch flying, but Jack is guided out of the exploding A Baoa Qu by the telepathic voice of Amuro Ray. As he flies out of A Baoa Qu, he witnesses the explosion of the White Base and crash lands on the SCV-73 Blanc Rival, crashing into the RX-78-3 Gundam "G-3" and seriously damaging it. Incidentally, Stingray also succeeded in escaping, although he lost his GM, and the two rejoiced over their safety aboard the Blanc Rival. After the war, he was hired by Anaheim Electronics in U.C. 0082 as a test pilot for the RX-78GP00 Gundam GP00 "Blossom".

He would later appear in the manga École du Ciel. Unlike Kamille Bidan, who entered AEUG as a civilian, Jack entered AEUG as a professional Federation MS pilot, sent to the lunar city of Anman in U.C. 0087 to test the capabilities of a captured Titans RX-178 Gundam Mk-II. He holds contempt for, and clashes with Marie Albertia's "pirates", who were also involved in the Gundam testing. During the Gryps War, he later serves as leader of the Halloween MS squad aboard the Irish-class battleship Zwickbau. 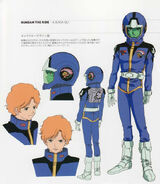 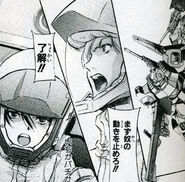