Jachin Due is a space fortress that appears in Mobile Suit Gundam SEED.

ZAFT's space fortress that forms the PLANT's final defense line. Thanks to its thick rock walls, the former resource-mining asteroid serves as an ideal location for a military base as a massive nuclear assault would be needed to destroy it. The size of Jachin Due also allowed for ample construction of command bays and service docks while still being able to withstand massive bombardment. After conversion into a military base, the asteroid was outfitted with multiple beam gun turrets to shoot down incoming enemy units and also protected by a large fleet of warships and mobile suits. Jachin Due was also the building site, location and control center for ZAFT's massive GENESIS superweapon. Jachin Due would be the site of two major battles during the First Alliance-PLANT War.

First Battle of Jachin Due

The first battle took place on April 17, CE 70, when the Earth Alliance attacked the PLANTs with its 5th and 6th fleets in the vicinity of the asteroid. ZAFT successfully repulsed the attack and the PLANT Supreme Council afterwards decided to convert the asteroid into a military space fortress for ZAFT forces. Jachin Due was thus one of two asteroid fortresses meant to protect the PLANTs; the other being Boaz.

Later, Jachin Due became the base of operations for the GENESIS project and the only remaining space fortress after the destruction of Boaz by the Earth Alliance on September 23, CE 71. One day later, the massive Second Battle of Jachin Due began during which the Earth Alliance again targeted the PLANT homeland with nuclear missiles, an attack which was however thwarted by the Three Ships Alliance.[1] As a result, Patrick Zala relocated to Jachin Due and ordered the use of GENESIS, which was capable of destroying a vast part of the Alliance fleet as well as the Ptolemaeus Lunar Base after two shots.[2] On September 27, the third shot was to be fired at Earth, which would have resulted in the death of the entire human race. To prevent this, all the other factions attacked Jachin Due, while Zala's own officers questioned his decisions, which eventually resulted in the chairman being shot by one of his officers. Before this happened, the self-destruction of Jachin Due was initiated, which was linked to the firing sequence of GENESIS. It was Zala's son Athrun Zala who decided to enter GENESIS with his ZGMF-X09A Justice Gundam to detonate its nuclear reactor inside it to prevent it from firing. Jachin Due eventually self-destructed and only a small amount of energy was released from GENESIS before it was destroyed in the explosion of the Justice's reactor.[3] 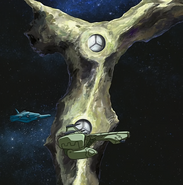