The JRX-0095-V1 (RX-95) Valiant Gundam (aka Kappa Gundam) is a mobile suit that is featured in the Project MUSHA manga.

Built as part of Anaheim Electronics' Zeta Project, the Valiant Gundam is a mobile suit built inside the Jupitris Kai in an operation to defeat the Neo Zeon Remnants. It usually identified by the codename Kappa Gundam. It was one of the more interesting mobile suits of the time, equipped with a Core Block System and a back weapon system from the RGZ-91 Re-GZ. It is also equipped with a Vallys Unit, a system equipped in the core fighter that acts as solar sails, using solar rays to propel the suit. It is also armed with a beam barrier to protect itself from attacks.

Weaponry wise, the Valiant Gundam is equipped with standard weaponry such as vulcan guns and beam sabers. The Back Weapon System of the suit mounts several missile pods as well to intercept enemies.

Codenamed Kappa Gundam, the mobile suit is built inside the Jupitris Kai on its voyage to Jupiter during the Second Neo Zeon Conflict. The unit's overall name is changed in development but it was fielded in combat in U.C 0095 in an operation to wipe out the remaining Neo Zeon remnants. 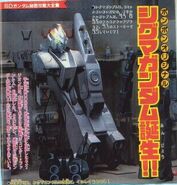 Retrieved from "https://gundam.fandom.com/wiki/JRX-0095-V1_(RX-95)_Valiant_Gundam?oldid=347848"
Community content is available under CC-BY-SA unless otherwise noted.