JOSH-A is an Earth Alliance military base in the Cosmic Era timeline.

JOint Supreme Headquarters - Alaska, JOSH-A (pronounced Joshua) was a major military base of the Atlantic Federation, it also served as the headquarters of the Earth Alliance forces during the First Alliance-PLANT War. Most of the facilities of this massive base was underground and as implied by its name, it was located in Alaska. The base was designed to withstand anything up to a nuclear attack and as such, was heavily fortified and could only be accessed by gates hidden in the landscape.

ZAFT forces were lured into the interior of the base in large numbers, allowing the Atlantic Federation to "kill two birds with one stone" by triggering the Cyclops System. The attacking ZAFT forces and the Eurasian forces were mostly wiped out, while the base itself was reduced to a smoking crater. This event shifted the inner Earth Alliance's balance of powers mostly towards the Blue Cosmos-controlled Atlantic Federation. After the destruction of JOSH-A, its functions were transferred to Heaven's Base in Iceland. 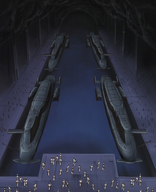