The JMA-0530 (Model U) Wodom (colloquially referred to as "Scarecrow" by the Militia) is a mobile suit that appears in the Turn A Gundam series.

The Wodom (short for "Walking Dome") is a large mobile suit for anti-ship warfare used by the Dianna Counter forces. The head is a generator and weapon block, with hatch-opening small missiles launchers, anti-aircraft Vulcan guns, and a beam cannon. This beam weapon is for anti-ship purposes and not intended to be used on the ground. In addition, there are also large missiles on both sides of the head. This head block can be separated and can fly independently.

Due to the Wodom's massive height of 40 meters, it is also very effective in kicking and punching in close range. Its armor has a high level of defense due to the use of nanoskin. The cockpit is in a cylindrical block at the lower back, and is very spacious compared to other MS'. The cockpit can be single-seat or double-seat, with pilot and unit commander on board to operate as a commander unit. Supposedly, the Wodom was expected to strike fear into Earthlings due to its peculiar appearance.

A powerful beam weapon mounted above the green camera eye and concealed by a hatch. It is powerful enough to destroy an entire city or even an Aspite ship in one hit.

Two sets of triple large missiles are attached to the sides of the large head unit.

Four small missile launchers are mounted next to the anti-ship beam cannon, two on the left and two on the right. They are concealed by hatches.

Two anti-air Vulcan guns are located in the large head unit, next to the small missile launchers. The guns' barrels pop out when in use.

The surface of the Wodom has a layer of nanomachines equipped with self-healing function. Since nanomachines themselves have intelligence, they disperse and absorb external impacts and self-repair. However, only the surface armor can be repaired, not internal mechanics.

A second generator can be attached on top of the mobile suit's head to boost the firepower and firing duration of the anti-ship beam cannon. However, the added weight requires the Wodom to support its head with both arms.

The Wodom was excavated from a lunar mountain cycle. It was the backbone of the Dianna Counter army and was also used by the Moonrace forces stationed on the space station Zacktraeger. One of the first units to be used on Earth was piloted by Poe Aijee, and her attacks on Inglessa would lead to the awakening of the ancient SYSTEM ∀-99 ∀ Gundam.

Small Missile Launchers (two on the left (partially concealed, two on the right (exposed)), Anti-Air Vulcan Guns (only the right side unit depicted) 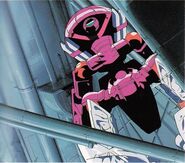 Tossed by Turn A

As seen on ∀ Gundam (Manga) 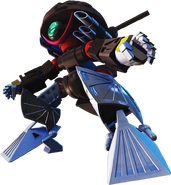