Produced by Teiwaz subsidiary Euro Electronics, the Kutan Type-III is a long distance transportation booster used for transporting containers and mobile suits.[1] It's primarily operated within the Outer Sphere by Teiwaz and other unrelated groups.[1] It has large movable arms for gripping onto containers, and hence can carry a wide variety of loads.[1][2] Instead of an Ahab Reactor like in ships and mobile suits, the Kutan Type-III uses a Hydrogen Engine as its power plant. However, the lack of an Ahab Reactor also means that it doesn't possess the defensive strength of nanolaminate Armor.[1] The Kutan-Type III is armed with a pair of Vulcan guns, and can optionally carry a pair of 300mm Smoothbore Guns.[1][3] Its large movable arms can also be used for melee combat.[4][3]

The Kutan Type-III shares the same main body as the short range Type-I, but it achieved a longer traveling range due to the equipping of huge boosters and propellant tanks.[1] Additional armor with small arm functions was also applied to the machine's sides, allowing it to transport a mobile suit into combat zones.[1] It is possible to operate the huge boosters and the small side arm armor separately from the machine, and there are records within Teiwaz of deploying the boosters directly attached to a mobile suit.[1] The usage of Kutan Type-III have expanded to include things like rescue missions and ship assaults.[1] When a mobile suit is onboard, the Kutan Type-III can be controlled from the mobile suit's cockpit.[1] The Kutan III's cockpit has three seats, but it is possible to control the machine using only one pilot. [4]

A pair of vulcan guns is mounted in the proximal part of the large movable arms on either side of the cockpit, one gun per arm.[3] Although the vulcan guns do not cause much damage to Nanolaminate Armor, they are still useful as suppressive fire.[3]

The same type of weapon as used by Gundam Barbatos, the Kutan Type-III can be equipped with two such guns to give it increased offensive power. The two guns are mounted on an optional armament attachment on the top part of the machine.[1] The 300mm smoothbore gun was produced for use mainly in zero gravity environment and space, the emphasis was placed on power rather than accuracy. It also has a 60mm machine-gun at the bottom. 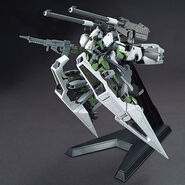 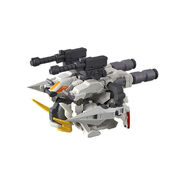