JDG-010 Devil Gundam Junior is a prototype DG-Cell infested mobile fighter appearing in the SD Gundam G Generation games. The unit itself is considered part of the Future Century Time-line.

However, the Junior also featured several deadly new abilities that its predecessor lacked. One such feature was its four Deva King bits. These four pods, typically stored on the machine's spiked legs, could detach and transform into half-imitations of the Devil Gundam's Four Heavenly Kings. Each bit focused on one of the Four Kings, sprouting Gundam Heaven's Sword's wings and claws, Grand Gundam's horns, Walter Gundam's tentacles, or the upper body of the GF13-001NHII Master Gundam.

A powerful beam weapon. Not much is known about it.

Four bits based on the Four Heavenly Kings. They possess weaponry that corresponds to whatever Heavenly King the bit represents. The Bits are most likely controlled through the DG Cells.

The DG Cells on the Devil Gundam Junior enable it to heal, evolve, and replicate itself. It also gives it the ability to control other DG Cell infested beings.

By releasing powerful psychowaves, the Devil Gundam Junior may control humans without using the DG cells.

Some reports say that a Devil Gundam Junior was spawned in the Guyana Highlands some time after the 13th Gundam Fight, but these remain unconfirmed. 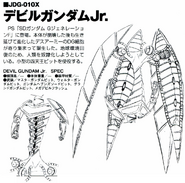