The Death Army (Dark Army in the English dub) is a group of mobile suits that appear in Mobile Fighter G Gundam.

The Death Army mobile suit is the backbone of the Devil Gundam's legions. Created by the Devil Gundam's nanotechnological powers of self-multiplication, these machines are operated by zombie soldiers who have been completely taken over by the dreaded DG Cells. While an individual Death Army mobile suit is no match for a Mobile Fighter or its Gundam Fighter, their vast numbers make them a serious threat, and the basic machine can be adapted to any environment with the appropriate add-on equipment. Known variants include the four-legged Death Beast, the winged Death Birdie, and the aquatic Death Navy, as well as specialized versions to impersonate individual Gundams, such as the Death Dragon and Death Master.

Mounted on its forearms, these were used rarely for close combat.

Its main weapon, a club-shaped beam rifle, it could also be used to batter enemies as a melee weapon. While the beams themselves are not powerful, multiple Death Army units could destroy enemies by concentrating fire on a target.

The Death Army was created by the JDG-00X Devil Gundam for protection while it repaired itself in Shinjuku. They were made by the Devil Gundam's ability to self multiply.

The Death Army's legions are organized into specialized land, sea, and air forces. Each of these divisions is commanded by a mobile fighter, with the GF13-001NHII Master Gundam serving as their overall leader. 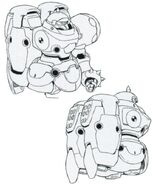 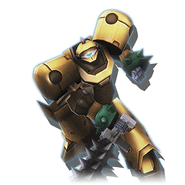 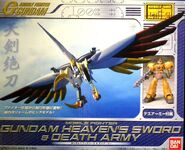