The Irish-class is a class of space battleships that first appeared in Mobile Suit Zeta Gundam.

A space battleship built by Anaheim Electronics with joint investment from private collaborators who support the AEUG. Its basic design is based on the Argama-class, but it also incorporates the concept of the Magellan-class to solve the problem of the Argama-class, which was its lack of firepower. To increase its firepower, the number of guns was increased and concentrated forward, which led to the Irish-class' classification as a "space battleship". The number of propulsion system has also been increased to enhance mobility, and by adopting a simple block structure, the ship has acquired excellent damage control capabilities.

The Irish-class's ability to deploy mobile suits has also been enhanced, with an additional deck at the rear for landing and a higher mobile suit carrying capacity than the Argama-class. On the other hand, it is not equipped with anti-air guns, so the ship's defense depends on its carried mobile suits. Additionally, to make the design suitable for mass production and to reduce cost, atmospheric equipment that are not required for the ship to operate in space as well as complicated structural mechanisms, such as the retractable guns, rotating residential blocks, and retractable bridge function, were all omitted. Instead, a two-layered structure was adopted for the bridge to differentiate its functions.

Overall, although its livability and versatility have been reduced, the Irish-class gained higher firepower and mobile suit deployment capability, and is cheaper than the Argama-class. More ship of this class was also produced than the Argama-class, with around a dozen being built. The Irish-class continues to be operated even after the integration of AEUG into the Earth Federation Forces, and a small number continue to be deployed even after the appearance the Clop-class.

The primary armament of the Irish-class are a pair of dual-barreled beam guns, one located in front of the bridge and another on the ship's bottom.

The Irish-class is equipped with five single-barreled secondary beam guns, with four on the sides and one behind the bridge.

The Irish-class was developed and built in U.C. 0087 by Anaheim Electronics' Granada factory. The Irish-class was commissioned and funded by the AEUG who required a more powerful and capable battleship/mobile suit carrier than the Salamis Kai-class cruiser during the Gryps War, yet less expensive than the Argama-class assault cruiser. One known ship was the Radish captained by Henken Bekkener, which fought and survived alongside the Argama for much of the war until its destruction at the hands of Yazan Gable during the Battle of Gryps.[1]

The Irish-class ships continued to serve the Earth Federation Forces for several decades. In December U.C. 0095, the Échalote, with two high-ranking Federation officers onboard, served as the mothership of the Unicorn Gundam 03 Phenex during joint evaluation tests with the Unicorn Gundam 02 Banshee. The Échalote's bridge was destroyed by the runaway Phenex in what would be later known as the "Échalote Incident".[2] During the Laplace Incident in U.C. 0096, one Irish-class ship was deployed to resupply the Nahel Argama. Three Irish-class ships were assigned to the 13th Autonomous Corps in U.C. 0120: the Arlberg, Meteran, and Saint Ives.

Destruction of the Radish (1)

Destruction of the Radish (2)

Destruction of the Radish (3)

Échalote (As seen in Gundam Narrative) 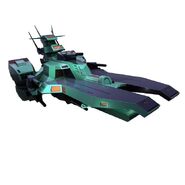