Io Fleming (イオ・フレミング, Io Furemingu?) is the protagonist of the Mobile Suit Gundam Thunderbolt and its ONA adaptations.

Although born into an aristocratic family, Io showed a great distaste for high society as a whole since his childhood. His character was neither refined nor prudent, but blunt, rebellious and daredevil. He had a heavy love for free jazz music, which he frequently played on his pirate radio receiver while using his mobile suit cockpit as a makeshift drum set.

As the war progressed, Io showed more and more mental instability, as exemplified by his vengeful altitude and constant clashes with Zeon pilot Daryl Lorenz.

The son of the old head of Moore colony in Side 4, Io became friends with Claudia Peer and Cornelius KaKa in his childhood. At one point, they formed a team participating in a race around the colony in mobile workers. Thanks to Claudia's tactics and his talent, Io's team gained a landslide victory. In addition, Io has a sister named Kathy Fleming, who holds a controlling stake in the family company, Fleming Industries, that he does not get along well with.

After the Principality of Zeon attacked Moore and his father committed suicide, Io, Claudia, and Graham enlisted in the Earth Federation Forces's Military Academy, becoming part of the Moore Brotherhood. He later became the pilot of a RGM-79 GM, and was among the EFF soldiers dispatched to Thunderbolt Sector. After a successful assault, in which he killed Hoover of the Living Dead Division and stole his MS-09R Rick Dom that contained valuable intelligence, Io was chosen to be the pilot of the experimental FA-78 Full Armor Gundam as a means of propaganda, as well as being the highest-ranking pilot who survived the previous battle.

Using the Full Armor Gundam, Io wiped out majority of the Living Dead Division's Big Gun units and ships. However, he later met his match in the form of amputee pilot Daryl Lorenz and the MS-06R Zaku II High Mobility Type (Reuse "P" Device)— also known as the "Psycho Zaku". The battle ended in a stalemate, with both units severely damaged. Io, along with the surviving members of the Moore Brotherhood, were captured by Zeon forces. While in solitary confinement, he was tortured and beaten by members of the Living Dead Division, despite protests by a Zeon guard. En route to A Baoa Qu, the Chivvay-class ship carrying the POWs crashed on the asteroid's surface. As the Zeon forces abandoned the ship, Io broke out of his cell and killed the remaining guards before reuniting with his comrades.

Following the end of the One Year War, Io was held responsible for allowing the damaged remains of the Full Armor Gundam to fall into the hands of the Zeon Remnants. He was relegated to a garrison post at a rear-line base. Io visited Claudia's grave in the reconstructed Moore colony and met with his sister Kathy. Using her connections, Io secured a post on the Pegasus-class ship Spartan. The ship's objective was to confront the South Seas Alliance, a rogue sect of the Earth Federation. The Alliance had secretly acquired the blueprints for the Psycho Zaku and planned to mass-produce it in order to expand its power. Io joined the pursuit team, reuniting with Cornelius, and was assigned the RX-78AL Atlas Gundam due to his experience battling the Psycho Zaku in the Thunderbolt Sector. Once aboard, he formed a friendship with fellow mobile suit pilot and music enthusiast Bianca Carlyle. 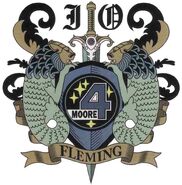 Thrilled by the Gundam's power.

Captured and tortured by the Living Dead Division.

Piloting the Atlas Gundam in the second season of Gundam Thunderbolt.

Retrieved from "https://gundam.fandom.com/wiki/Io_Fleming?oldid=483070"
Community content is available under CC-BY-SA unless otherwise noted.