The Infests is an aircraft used by ZAFT from the Cosmic Era.

It is capable of take-off and land vertically, and it can fold up so it can be carried by ZAFT submarine carriers. It is equipped with two 12mm autocannons, four 25mm autocannons, and four hardpoints for missiles

The Infestus was a VTOL fighter created by ZAFT for combat on Earth. However, with the development and rollout of the mass-produced AMF-101 DINN mobile suit and Guul subflight drone, it soon became obsolete, and was rarely seen by C.E. 71.[1] It appears to be completely decommissioned by C.E. 73.

Two Infestus beside a Petrie-class (The End of the Sandstorm, HD Remastered)

Infestus tailing Skygrasper (The End of the Sandstorm, HD Remastered) 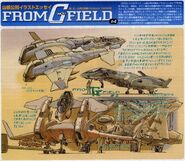