He is mild-mannered and reserved. Initially, his personality causes him to be overwhelmed when he tries to express his opinions to his friends. However, through the First Neo Zeon War, he grew up to be able to express his own opinions, and he successfully fought until the end of the war. He is very friendly and does not denounce Beecha and Mondo even though he knows that they tried to sell the Argama to the enemy.

Iino Abbav grew up in the Side 1 colony Shangri-la where he became friends with Judau Ashta, Leina Ashta, Elle Vianno, Mondo Agake, and Beecha Oleg. He made a living as a junk collector with Judau Ashta.

After finding Yazan Gable, Iino helped his friends in their attempts to steal the Zeta Gundam from the Argama. However through a twist of fate, because of the constant interference of the crew of the Endra, Iino and his friends ended up helping the Argama and became a member of its crew after the warship left Shangri-la.

After the end of the war, he and his friends see off Judau and Roux, who are leaving for Jupiter, at Von Braun City on the Moon. 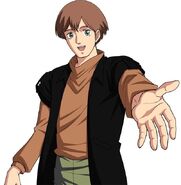