The captain of the newly constructed Earth Alliance warship Girty Lue, which serves as Phantom Pain's mothership during the attack on Armory One. Ian is a capable officer who can be relied upon to carry out his duties.

The Battle of Daedalus

During ZAFT's attack on Daedalus Base later in the war, Ian was killed when the ZGMF-X666S Legend Gundam, piloted by Rey Za Burrel, destroyed the Girty Lue's bridge with its DRAGOONs. 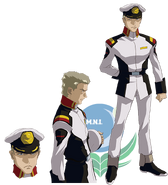