The IPP-66305 Hugo is a mobile suit featured in the second season of the Mobile Suit Gundam IRON-BLOODED ORPHANS television series.

Developed during the middle stages of the Calamity War, the high mobility Hugo is primarily for space use.[1][2] It is unsuitable for walking under gravity due to the feet having extremely little contact surface with the ground.[2] Designed for medium and close-range combat, most of its weapons are for supporting its allies instead of single combat with opponents.[1] Despite this, it is capable of fighting on its own if required; its specialty is capturing the enemy with its shot anchor claws and/or leg claws and then finishing off with its handheld melee weapon.[3][4]

To retain mobility, the Hugo have less armor than most mobile suit, leading to most of them being shot down during the Calamity War.[1] However, thanks to its cockpit being located in the head, its pilot have an easier time bailing out, resulting in higher pilot survival rate.[1] The Hugo's Hexa frame has also been improved with reverse-jointed legs, which have auxiliary motors placed at the back of the knee.[1][2] This not only allows the suit to use them like arms, but also increase the motion torque of the leg claws.[1][2] The Hugo has strong support from pilots that prefer mobility, and many of the surviving units are operating in the vicinity of Mars.[2][5]

Mounted on the waist armor, the pair of shot anchor claws can be used to haul supplies, or to capture enemy unit and restrict its movements.[1][5] However, due to the lightweight design of Hexa Frame, a captured enemy with sufficient power can use the claws to sweep the Hugo aside instead.[4][5]

The Hugo's feet can be used as claws.[3][4] The suit excels at grouping together and then attacking a single opponent in close combat with the leg claws and shot anchor claws.[5]

The Hugo have four missile launchers on the head, two on each side.[2] The launchers pop out when firing the missiles, which contain Napalm.[4][6]

Also known as Engetsuto, this is a standard equipment for Hugo since the Calamity War.[1] The pair of Scimitars can be used to parry and entangle enemy's weapons, as well as damage enemy units with its high mass.[1][4][5] Used by Sandoval's unit and stored on the backpack when not in use.[1][4]

A machine gun developed by Hephaistos, a company located at a Lunar Lagrange point.[1] Used by Sandoval's unit.[4]

A large weapon for close-range combat used by pirates.[7] It can be held using both the primary grip and the secondary grip behind the blade.[2] Used by the pair of Hugos operated by the twin brothers of the Dawn Horizon Corps, as well as the Hugos of JPT Trust (a subsidiary of Teiwaz). Stored on the backpack when not in use.[4]

A medium-to-long-range rifle developed by Hēphaistos, its foregrip can swing either directions.[2][7] Used by the pair of Hugos operated by the twin brothers of the Dawn Horizon Corps, as well as the Hugos of JPT Trust.

Three Hugos were used by Dawn Horizon Corps, one by its leader, Sandoval Reuters and the other two by the group's executives, the twins. During the space battle between Dawn Horizon Corps and Tekkadan, the twins launched in their Hugos first and held off Tekkadan and the small Gjallarhorn force lead by Isurugi Camice prior to the arrival of Rustal's forces. When the tide of the battle turned against the Dawn Horizon Corps, Sandoval Reuters launched in his Hugo. The twins and their Hugos were later defeated by Isurugi and Julieta Juris‎‎ separately, while Sandoval was defeated and captured by Mikazuki Augus. The fate of the three Hugos afterwards is unknown. Several Hugos painted in purple and brown were used by JPT Trust in their battle against the Tekkadan, but all of them were defeated. 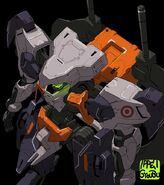 Dawn Horizon Corps' Hugos (Sandoval's at center, with the twins' at the sides)

One of the twins' Hugo aiming the 300mm Long Rifle