The IPP-0032S Gilda SAU (aka IPP-0032S Gilda) is a mobile suit from the second season of the Mobile Suit Gundam IRON-BLOODED ORPHANS television series.

Sourced by the SAU independently, the Gilda SAU is a variation of the IPP-0032 Gilda, an easy to use Calamity War era machine based on the the Hexa Frame.[1] The Gilda SAU has a different head and chest design compared to the standard Gilda, but what really sets it apart is that it is better armed due to being SAU's main mobile suit, instead of a worker mobile suit like the standard unit.[1][2][3]

The Gilda SAU's mobility and variety of armaments allow it to handle any combat situation at close-mid range.[4] However, the low number of surviving Hexa Frame machines meant the Gilda SAU is not truly suitable for deployment on a military scale.[1] Thus, it is deployed alongside other machines.[1] The fact that the SAU used the Gilda SAU in the military indicated that the economic blocs are still exploring how to expand their military forces.[1]

Basically a large handgun, it can be stored on the rear skirt armor.[1][3]

A close combat weapon that is a cross of a sword and club; it is unknown what the slit at the top of the weapon is for.[1][3] Stored on the back when not in use.[3]

Carried on the left forearm, it is a small and easy to handle shield with two pile bunkers.[1][3]

During the Arbrau-SAU war, SAU deployed several Gilda SAUs alongside the SAU Mobile Workers, and Gjallarhorn's Graze Ground Types to fight against Arbrau's Hloekk Grazes, Galan's Geirail and the Geirail Scharfrichters piloted by his subordinates, and Landman Rodis of Tekkadan. Later, a Gilda SAU found Takaki's Mobile Worker and was about to shoot it down, but Galan arrived and defeated it, saving Takaki. 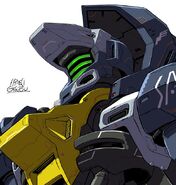 Retrieved from "https://gundam.fandom.com/wiki/IPP-0032S_Gilda_SAU?oldid=451374"
Community content is available under CC-BY-SA unless otherwise noted.