The Human Reform League is a supranational politico-economic community consisting of China, Russia, the nations of South Asia (India and Bangladesh, with the exception of Afghanistan and Pakistan), Mongolia, the member states of the ASEAN, Timor Leste, Papua New Guinea, the Korean Peninsula, and Taiwan. It controls the second-completed of the three orbital elevators. The chairperson who serves as the head of government resides in the capital, which is located somewhere in China. The HRL currently operates the space colony, Quanqiu, at Lagrange Point L4, where one of the laboratories of the Super Soldier Special Duty Organization was situated prior to its destruction at the hands of Celestial Being.

Though the exact nature of the HRL's government is not made clear, it appears to be caste as a socialist (politico-economic entity). This is made evident in many ways throughout the series, as its in line with the present policy of the powerful constituent state of the People's Republic of China (as well as the former USSR), and is perhaps most obvious in the name of their orbital station, The Internationale, a reference to an old socialist anthem of the same name by Eugène Edine Pottier.

The HRL currently operates the orbital station, The Internationale, that is connected to their space elevator Tianzhu (天柱). The Internationale was a target of a terrorist attack that was thwarted by armed intervention of Gundam Kyrios and Gundam Virtue.

The HRL currently operates the space colony Quanqiu (全球) at Lagrange Point L4, where one of the laboratories of the Super Soldier Special Duty Organization was situated prior to its destruction at the hands of Celestial Being.

The HRL authorities will often take orphaned and abandoned children (e.g. refugees) into these facilities to be used for the super soldier program's experiments, hoping to develop an ideal Super Soldier for the HRL to use. In 2307 AD, it is likely that the Research facility haven't produce a desired product yet, as it continues to operate and experiment on hundreds of their test subjects.[1] Despite that, the facility, once in a while, provide some of their satisfactory test subjects to the HRL army, notably Leonard Fiennes and Soma Peries, in order for the higher ups to let the facility continue running.[2]

The Research Facility would eventually be closed down by Sergei Smirnov of HRL, around 2307-08 AD, when Celestial Being finally exposed the facility's inhumane practices, in which they operate, to the public.[1]

After Celestial Being appeared, HRL created a special forces unit known as "Chobu" to capture or destroy the Gundams. Sergei Smirnov was the unit's commanding officer.

The HRL's main mobile suit is the Tieren series which is less advanced and less maneuverable than the mass-production types of the other major powers like the Union's Flag and the AEU's Enact. However, the Tieren series have high defensive capability. Furthermore, its technology is highly reliable and the machines can be easily maintained.

Sergei Smirnov
MS team commander of the Human Reform League. 43-years-old. His rank is Lieutenant Colonel.[4]
Holly Smirnov
wife to Sergei Smirov and mother to Andrei Smirnov. She died several years earlier before Season 1, related to a mission that Sergei was responsible for and an unforgivable matter from Andrei.
Andrei Smirnov
is the son of Sergei Smirnov and Holly Smirnov. Joined the HRL military to become a military officer himself.
Soma Peries
Super-Soldier No.1 from the Superhuman Agency’s Technology Institute.
Delphine Bedelia
[00P] is a test pilot from the Next Generation Development Technical Laboratory of the HRL and serves as the Tieren Kyitwo mobile suit's rear seat pilot.
Leonard Fiennes
is a Super Soldier and MS test pilot for the Human Reform League in Mobile Suit Gundam 00P.
Kim
a HRL Commander, and Sergei's superior. He is often placed in the command of anti-Gundam operations.
Ming
a First Lieutenant in the Human Reform League and a member of the Chobu unit headed by Sergei Smirnov.
Pang Hercury
joined the HRL army, along with Sergei Smirnov and his eventual wife Holly. 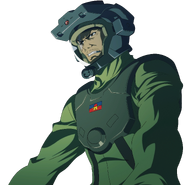