Hugues Courand (ユーグ・クーロ) 32 years old, was a veteran mobile suit pilot for the Earth Federation during the One Year War. He is the protagonist of the Mobile Suit Gundam: Battlefield Record U.C. 0081 video game.

During the One Year War, Hugues was the leader of the 04th Mobile Suit Squadron, which participated in Operation 41, a part of the Federation's North American counteroffensive. He was the sole survivor of the operation, having lost all of his subordinates in battle. To make matters worse, the high command made him a propaganda hero against his will, causing him to be filled with guilt.

Hugues would go on to participate in the Battle of A Baoa Qu, the final battle of the war. However, during the battle, his unit was ambushed by three MA-05 Bigros while resupplying, once again killing all of his subordinates and leaving him the sole survivor. Ever since then, Hugues became infamous for being a "subordinate killer".[1]

In U.C. 0081, Hugues becomes commander of the special unit Phantom Sweep Corps, in charge of mopping up Zeon remnants on Earth. 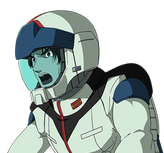