It is actually more of a light armored vehicle than a truck, and is in charge of communications, reconnaissance, and patrol. Equipped with four hover units at the bottom of the vehicle, it can handle all kinds of terrain, including swamps, rough terrain, and water, and has the running performance to follow the speed of MS troops. The rear of the vehicle is a cargo bed, which can be used to carry infantry personal weapons and spare personnel. The commander's vehicle for troops is equipped with a radome to enhance communication functions. On the side of the vehicle is an underground sonar that is embedded in the ground to detect vibrations in the surrounding area.

Mounted on the upper turret of the main body, it is manually operated by the gunner. It uses armor-piercing shells for anti-light armor and howitzers for anti-personnel and anti-aircraft rounds, depending on the situation.

A sonic spying device. It was developed in response to the inability to use conventional radar to search for enemies on the battlefield under the dispersal of Minovsky particles. It is launched into the ground, and ultrasonic waves are used to search for enemies and measure distance based on the unique sound crests emitted by the walking legs and vernier jets as the MS moves.

The standard ground mobile suit team consisted of three mobile suits and a Hover Truck, and these units were deployed all across the world from Asia's Kojima Battalion to the White Dingo Team in Australia. In U.C. 0081 one unit supported the Phantom Sweep Corps in their operations against Zeon remnants. 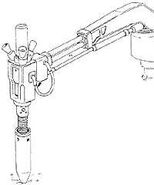 Hover Truck (bottom left) as seen on Gundam: After Jaburo