The Gundam Wiki
Register
Don't have an account?
Sign In
Advertisement
in: Characters, Not Applicable/Specified characters, Male, Project: Build Series

Hiroto Kuga (クガ・ヒロト, Kuga Hiroto?) is the main protagonist of the anime Gundam Build Divers Re:RISE. He is the builder and pilot of the PFF-X7 Core Gundam.

Hiroto is a 17 year-old boy attending a high school in a seaside city. He has a lot of experience in Gunpla Battle Nexus Online and is a great Gunpla builder and fighter. Recently, he's become a mercenary and searching for someone that went missing in GBN a long time ago. Hiroto is disinterested in joining any force until the BUILD DiVERS is formed by accident.[1]

Hiroto has keen hand-eye coordination skills. He has acute senses and can dodge most attacks. He also possesses refined judgement and can accurately assess what needs to be done to complete a mission.

Two years ago, Hiroto signed up to GBN and met Eve. They developed a friendship and participated in many missions together. At some point, Hiroto also joined force Avalon and before the Second Coalition of Volunteers, Eve was erased in front of him. Dejected, Hiroto changed into a more stoic individual, sporting a cape on his original Diver outfit which resembles a wanderer and became determined to find Eve again.

In the present, Hiroto takes part in a battle and draws the attention of Par and Kazami who both try to befriend him. Although Par backs out, Kazami persists in having Hiroto join him in a mission, only to be rejected. On that Sunday, Hinata drags Hiroto to their local Gundam Base and convinces him to play GBN. Logging in, Hiroto is accosted by Kazami who forces him to help track down a secret mission in one of GBN's back alleys. During this encounter, Par spots the pair and follows them.

In the back alley, Hiroto and Kazami hear a scream and discover Par and May in front of an active screen where they meet Freddie who asks them for help. Despite being initially cautious, Hiroto is reluctantly forced to join the mission when Kazami presses the confirmation button and is transported to a ruin.

Arriving, Hiroto and the others are greeted by Freddie who calls them "Creators." Upon May's request, Freddie leads the group outside to their machines. After a brief conversation, Hiroto and the others suddenly hear a rumble and spots three enemy machines: one Eldora Hover Brute and two Eldora Bull Brutes. Kazami, Par and May leave to fight them, while Hiroto stays back to gather data on the enemy's movements. Hiroto later joins the battle and uses Earthree Gundam's beam rifle to eliminate the enemy.

After the battle, Hiroto is surprised when a screen pops up with the force name, 'BUILD DIVERS'. Concerned about what to do, Hiroto is further surprised when May registers the force name with a little 'i' in the Divers part. The screen then displays that the mission is complete and Hiroto is returned to the GBN Seaside Base. Logging out, Hiroto utters his disbelief that he is a member of BUILD DiVERS.

A friend of Hiroto's since childhood.[2] They share a strong bond and support each other.

A mysterious girl who appears before Hiroto in GBN, two years prior to the series. During their time together in GBN, they developed an irreplaceable relationship until Eve was erased in front of Hiroto before the Second Coalition of Volunteers battle. She is very important to Hiroto and the time they spent together is Hiroto's most precious memory.

The Build Divers name seems to irritate or even anger Hiroto.[1][2] The way he reacted to Kazami when he referenced both the force's fight with the Second Coalition of Volunteers and the Lotus Challenge seems to suggest that he disliked them for some reason.[1][2]. It is later revealed that Hiroto fought the Build Divers as part of Avalon during the Second Coalition of Volunteers battle.

Hiroto was originally part of force Avalon, but he returned to being a solo Diver after the Second Coalition of Volunteers battle. 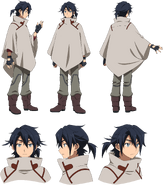 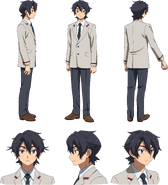 Hiroto & his team in first opening

Wearing a Force Avalon uniform in the 1st Coalition of Volunteers