Himalaya-class was an anti-submarine aircraft carrier used by the Earth Federation Forces that first appeared in Mobile Suit Gundam.[1]

The Himalaya-class resembled the Kiev-class aircraft carrier used by the Soviet Union. It was armed with a twin gun turret near the front, several missile launchers, a single gun behind the bridge, and six anti-aircraft turrets. It could carry around 30 Don Escargot, and had four landing spots for VTOL aircraft.[2] In order to perform take-off and landing under Minovsky particle interference, it was equipped with a powerful guidance system.[3]

By U.C. 0096, it appears to have been modernized, with its anti-aircraft guns replaced with rotary CIWS and different equipment on its deck.

The Himalaya-class mounts a twin-barreled main gun turret in front of the bridge as its main armament. It is unknown if it is a projectile-based weapon or a mega particle cannon.

A secondary single-barreled gun turret is mounted at the rear of the bridge.

The Himalaya-class is armed with multiple missile launchers for anti-submarine warfare. They are mounted in the bow of the ship, in font of the 2-barrel main gun turret.

The Himalaya-class is armed with multiple single-barreled gun turrets for anti-aircraft defense. There are two on each side of the rear of the ship, while another two are mounted portside of the main flight deck. Some refits like the Westmoreland mounted an additional two on the bow of the ship, in front of the missile launchers. Later designs had the single-barreled gun turrets replaced by rotary CIWS turrets.

The Himalaya-class entered service before the One Year War. After the outbreak of the war, they became the flagships of anti-submarine groups - special formations created to counter the Principality of Zeon's submarine fleets. Several dozen new ships were constructed during the middle stage of the war.[1]

In late May, a Himalaya-class carrier, the Westmoreland, served as the flagship of a Federation fleet tasked with retaking the Port Moresby base. The ship, along with much of the rest of the fleet, was sunk by Zeon's new MSM-03 Gogg mobile suits.[4]

On November 24, Zeon's Mad Angler Team, led by Char Aznable, attacked a Federation anti-submarine group while tracking the White Base, sinking a Himalaya-class.[5][6]

The Himalaya-class would still be in service in U.C. 0096, when a ship of this class, along with a team of RAG-79 Aqua GMs, were destroyed by the AMA-X7 Shamblo off the shore of the Torrington Base in an attempt to counter an attack by Zeon Remnants.[7] 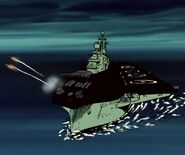 Destroyed by the Mad Angler

Being destroyed by the Shamblo