An officer who belongs to the Technical Evaluation Division. He is considered to be somewhat of a facetious and loose character. At the Battle of Loum, Hideto piloting a small shuttle helps Oliver May gather more data for the QCX-76A Jormungand can have a more precise shot at the Earth Federation fleet.

Hideto Washiya pilots a EMS-10 Zudah along with Jean Luc Duvall, and another pilot. However, the testing soon goes wrong after a fellow test pilot is killed when his Zudah lost control and disintegrated during combat simulation. The Jotunheim responds to the distress call of orbit-drowning Zeon forces retreating from Odessa. Hideto launches in the Zudah along with Monique Cadillac and Jean Luc Duvall to save the fallen soldiers.

I Saw the Ocean in Jaburo's Skies

To infiltrate a prototype weapon into the Federation airspace and attack Federation warships launching from Jaburo. Ensign Werner Holbein is assigned to the Jotunheim to pilot the mobile diver unit MSM-07Di Ze'Gok. On the second test drop Werner and Hideto try to stop Earth Federation ships from going into space by firing missiles at them. The test drop ends in failure after unable to score any hit with the Ze'Gok. Later on, to make sure Werner's third test drop goes well, Hideto goes to battle Earth Federation ships in the Zudah along with Oliver.

Oliver May introduces the AMX-002 Neue Ziel to Anavel Gato, with Monique Cadillac and Hideto Washiya (from Gundam 0083 Rebellion) 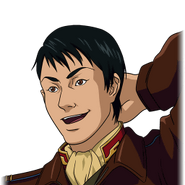 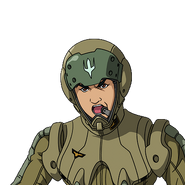