A "mobile ninja" based on the RX-78-3 Gundam "G-3". To increase mobility, the outer armor has been simplified, and repainted black and white. A special heart sensor system is installed in the cockpit, which allows for a panoramic monitor view by utilizing the magical "Nine Kanji".

A beam sword styled after the ninjatō short swords used by ninjas in feudal Japan.

A canister that contains Minovsky particles that cloaks the target from local radar. These new smoke bombs are used for the “Minovsky hiding jutsu”.

In the manga, the RX-78-3 Gundam "G-3" was stolen from the Earth Federation Forces by the ninja Hyuga, who presented it to Degwin Sodo Zabi. However, Degwin, who had just lost his son Garma Zabi, grew tired of the war and arranged for peace negotiations. As a result, he granted Hyuga permission to make the G-3 his own personal mobile suit. However, during an attack by ninjas seeking to make the G-3 their own, Hyuga was mistook for Amuro Ray by fellow Zeon forces, and was killed. The G-3 was subsequently entrusted to Ryoga, who customized it into the Hidden Shadow of G for his own personal use.

Ryoga would use the Hidden Shadow of G for at least fourteen years, working as a mercenary in various conflicts, up until the Second Neo Zeon War. However, due to being outdated and having an aging fusion reactor, it is destroyed during Ryoga's final fight. 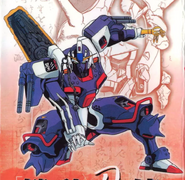 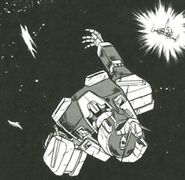 Retrieved from "https://gundam.fandom.com/wiki/Hidden_Shadow_of_G?oldid=497604"
Community content is available under CC-BY-SA unless otherwise noted.