The Hi-Mock is a drone unit from the anime series Gundam Build Fighters Try. Based on the Mock, it is built by Yajima Trading.

Created by Yajima Trading, the Hi-Mock is an improved version of the Mock and appears in the company's Gunpla Battle system in the form of 3D computer graphic. Like its predecessor, it serves as an AI-controlled opponent during Gunpla Battle training, and numerous variants with different weaponry and head variation exists. The players can freely adjust Hi-Mock's AI difficulty level and weapons to suit their needs.

One of the weapons that the Hi-Mock can use is its custom beam rifle. This handheld beam weaponry has a high rate of fire, and resembles the Mock Rifle used by the original Mock.

By adjusting its settings, the Hi-Mock can be equipped with the MSZ-010 ΖΖ Gundam's head-mounted high mega cannon and v-fin. 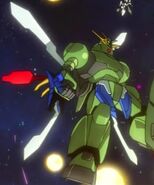 Retrieved from "https://gundam.fandom.com/wiki/Hi-Mock?oldid=407383"
Community content is available under CC-BY-SA unless otherwise noted.