She is a more cheerful character than Hanayo and Hayana.

She is able to express her emotions freely. She has the ability to reset the memories of other Innovades.

Presumably an Innovade of the same base sequence as Hanayo and Hayana. She was seen in Katharon base along with Sulu Suluzu by Telicyra Herfi. In chapter 13 of Gundam 00I, Telicyra awakens Hermiya as one of the six comrades and with the subsequent awakening of Regene Regetta, the six comrades are complete. Veda tells each one of them the true purpose of the gathering of the six comrades. Their role is to become the new observers and to perfect Aeolia Schenberg's plan that was supposed to be jointly carried out by three intellectual groups: humans, Veda, and Innovades. With humans observers having failed in their job, Veda decided to select a group of Innovades as the new observers. However, Regene regarded the role of observer as a waste of his new ability to control original GN Drive and GN Drive Tau, so he decides to eliminate the other five comrades in pursue of his own goals. As his escape, he contacts Beside Pain in the CB-001.5 1.5 Gundam to attack the orbital elevator where the group is at. Upon agreement from the other four comrades, Hermiya gains access to her ability of removing a comrade from the six, and uses it on Regene. This resulted in Regene's memory of the six comrades and his ability to control original GN Drive and GN Drive Tau to be completely erased. In the epilogue of Gundam 00I chapter 14, Telicyra, Sulu, Hermiya, and Bryn are now living together. 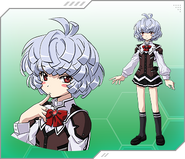