Go Beyond the Peak of the Beams of Light

The situation for Zeon is getting desperate after the Federation successfully sieges the space fortress Solomon. Upon arriving at A Baoa Qu, Jotunheim is visited by Herbert von Kuspen, a Colonel Commander from an elite battalion, who immediately try to assume command of the ship but meets resistance from both Monique Cadillac and Martin Prochnow.

Upon the arrival of the Oggo pilots he expresses disgust with how the "Elite Force" he was promised turned out to be a bunch of young recruits that had no combat experience. However, when the Jotunheim encounters two Salamis-class ships he only gives permission for three Oggos to launch despite being up against over twice the number of Balls as he did not want to risk any more resources with the decisive battle approaching at A Baoa Qu.

When the Federation launches a large-scale desperate attack on A Baoa Qu from two directions, the Kuspen Combat Battalion is assigned to defend the E field, and Oliver May is shocked when he is ordered by Kuspen to pilot the MA-05Ad Big-Rang. The Jotunheim fires signal flares to begin drawing in surviving troops. A friendly fleet led by a Gwazine-class approaches from the rear. Kuspen wonders if they're reinforcements, but the fleet leaves. Prochnow says that they lost contact with A Baoa Qu ten minutes ago, but Kuspen doesn't believe that they could have lost. Ehrlich Kruger reads an emergency message from A Baoa Qu, which states that the command structure has been lost and that all forces are to cease fighting. Kuspen refuses to accept surrender, and Prochnow says they have to accept the reality that they've been defeated.

He says that with their forces retreating and the Federation pursuing, they could hold E field for only 30 more minutes. Then Kuspen pulls a gun on Prochnow, and he wants his Gelgoog prepared for launch. Monique then pulls a gun on Kuspen and asks if he plans to dump his subordinates and escape alone. Kuspen says he's had enough of Monique's retorts, and she tells him a disobedient commander is something to laugh at. When the Jotunheim encounters a vanguard detachment of the Federation fleet, which decided to keep fighting even though a cease-fire was ordered. Oliver's Big Rang is almost destroyed but is saved by Monique piloting a Zudah and Kuspen in his custom MS-14A Gelgoog. Kuspen destroys two RB-79 Ball and orders the MP-02A Oggo pilots to defend E field until their troops can safely escape. Although the remaining E field forces successfully hold out, Kuspen sacrifices himself, protecting one of the Oggos. 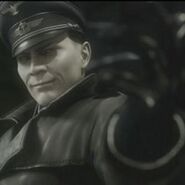 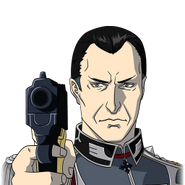 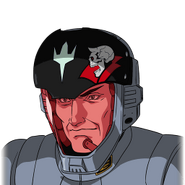