The Heli is a VTOL (Vertical Takeoff And Landing) aircraft that first appeared in Mobile Suit Gundam SEED.

The helicopter-like VTOL (vertical takeoff and landing) aircraft known as the Heli, is a light weight, twin-seater aircraft used for combat support and patrolling areas from the sky. Some Heli's were also used to transport VIPs, such as Cagalli Yula Athha.

Primarily used by the Orb Union, Heli's were most often operated from the Aegis-class cruisers of Orb's defense fleets as aerial scouts. In CE 71, Uzumi Nara Athha uses a Heli to fly over the battlefield after the initial Earth Alliance attack on Orb.[1] The Heli was still in use in C.E. 73, where Cagalli used a Heli as a means of transport from her home to Orb's governmental building.[2] 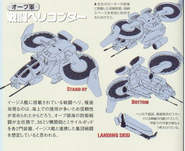