Baer was a Federation MS pilot during the One Year War, and pilot of the FA-78-1 Gundam Full Armor Type. He was known to have participated in the battle of Solomon. Baer was credited with 37 enemy kills and two vessels sunk. Baer would later participate in the Battle of A Baoa Qu and would confront Johnny Ridden in his MS-14B Gelgoog High Mobility Type. After severely damaging Johnny's Gelgoog, Heinz Baer would meet his end when confronting The Crimson Lightning again, piloting his custom MS-06R-2 Zaku II High Mobility Type. 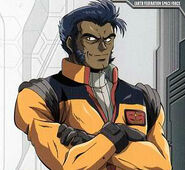 Add a photo to this gallery
Retrieved from "https://gundam.fandom.com/wiki/Heinz_Baer?oldid=461600"
Community content is available under CC-BY-SA unless otherwise noted.