Heine Westenfluss (ハイネ・ヴェステンフルス, Haine Vestenfurusu?) is a Coordinator and a ZAFT pilot who appeared in Mobile Suit Gundam SEED Destiny.

Heine was decidedly an optimistic, but realistic, soldier who didn't stand too much on ceremony, and was also quite talkative and ernest in his attempts to raise the morale of his fellow pilots. Despite considering himself an elite, Heine was respected by both superiors and subordinates as a capable pilot and officer. Heine also had a sense of pride in his skills, seen when he tried to continue to assault the Freedom Gundam after it had beaten him, despite his GOUF Ignited being damaged, which ultimately led to his demise. Although Heine was part of Athrun Zala's squad after his transfer to the Minerva, Heine was treated almost as a superior to Athrun by his peers, even by Athrun himself. Athrun and the rest of the Minerva crew were left saddened by Heine's death, demonstrating how much they cared for and respected him. Athrun went so far as to almost once again have a grudge against Kira, whom he blamed for Heine's death (even though Kira was only indirectly responsible).

Heine Westenfluss is considered an ace pilot of ZAFT, not only wearing the ZAFT red uniform, given to pilots who have graduated at the top of their class, but also wears the FAITH insignia on his uniform, indicating that he's of the FAITH detachment, to which only the best of the ZAFT elite are allowed to join. Being a member of FAITH also means Heine can issue orders to other non FAITH soldiers as well as plan battle operations, Heine also only reports directly to either Chairman Gilbert Durandal or the PLANT Supreme Council. Heine was extremely skilled in battle using his custom mobile suits, an orange Blaze ZAKU Phantom, and later an orange GOUF Ignited. The depth of his skill was seen during the Battle of Dardanelles, where he fought against the ZGMF-X88S Gaia Gundam, not only holding his own against the mobile suit but even pushing it back despite the Gaia being a more advanced mobile suit than his GOUF Ignited.

Heine Westenfluss was born in September 19, CE 52 in September City; not much is known about Heine during his upbringing, but what is known is that he joined the ZAFT February 21, CE 68 and attended the military academy where he graduated at the top of his class. Joining the ZAFT military at the age of sixteen and as a red coat, Heine's fellow soldiers already regarded him as an ace. When the First Alliance-PLANT War broke out, Heine was assigned to Hawkins team, and saw combat during the war.

When ZAFT's New Millennium series of mobile suits came out, Heine, having proven himself as an excellent combatant during the First Alliance-PLANT War, was given a ZGMF-1001/M Blaze ZAKU Phantom in his own custom colors. With the tragedy of the Junius Seven drop and the subsequent declaration of the Second Alliance-PLANT War, Heine and the Hawkins Team were once again called out to the front lines.

Heine first appeared in Phase 9 (Prideful Fang) of SEED Destiny, taking part in The Battle of Aprilius One in his orange ZAKU, though Heine himself was not shown. The battle ended in victory for ZAFT, and Heine's performance in the battle has been noted as exceptional, as he destroyed a great number of mobile suits and several battleships.

Heine is later made leader of his own team; while on a mission with a wingmate they encounter Gai Murakumo and Elijah Kiel of Serpent Tail and the pairs quickly engage in battle. Gai in his MBF-P03 Gundam Astray Blue Frame ends up killing Heine's wing mate, which prompts an enraged Heine to attempt to kill Elijah, though only succeeds in badly damaging his ZGMF-1017 GINN Elijah Kiel Custom, forcing the mercenaries into a retreat. Impressed by his skill, Gilbert Durandal invites Heine to join FAITH, but Westenfluss declines, as he is not obsessed with promotions, though latter accepts the offer, receiving a ZGMF-X2000 GOUF Ignited in his custom colors (this was not shown in the anime, but explains how he received his promotion and GOUF).

Joining the Minerva & the Battle of Dardanelles

Heine is officially introduced in Phase 19, where he escorts Athrun Zala, Shinn Asuka, and Lunamaria Hawke to meet Chairman Durandal at Diocuia after the Battle of Gulnahan. Afterwards, Heine's team disbands and he joins the crew of the Minvera and later takes part in the Battle of Dardanelles in his orange GOUF. During the battle, he fights against Stella Loussier and her ZGMF-X88S Gaia Gundam, where he maintains the upper hand. With the arrival and interference in the battle by the Archangel and ZGMF-X10A Freedom Gundam, piloted by Kira Yamato, Heine attempts to stop Kira from further disabling of ZAFT mobile suits, only to have his GOUF’s right forearm severed. Not wanting to be insulted, he tried to attack Kira from the back, but gets in the way of Stella who also attacks Kira with beam blades on her Gundam's wings, resulting in Heine's mobile suit as well as his body being sliced in half, killing him. His death comes as a shock to the Minerva crew (especially Shinn and Athrun) who mourn Heine's loss.

Heine also appears in the manga adaptation of Gundam SEED Destiny; while his role and fate remain the same, in this version he was shown to be involved in the Battle of Gulnahan, together with his team. During the battle, the team leader ordered his men not to retreat and to hang in there while Shinn made his way to the "Lohengrin" cannon. After the battle, his team was disbanded. Also, Athrun used him as an excuse to get away from Meer Campbell during the night at Diocuia. The two FAITH pilots later went drinking. During this drinking session, Heine expressed his sadness that one of his men had died in their last battle together; he then said that he did not wish to get used to the feeling of not looking back when one of his own fell, and to march forward until the end of the battle. 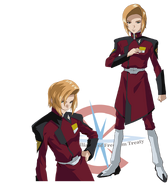 Heine gets killed by the Gaia (The Shadows of War, Original)

Heine's soul image after his death (The Shadows of War, Original)

Heine and others after the Freedom's arrival (HD Remaster) 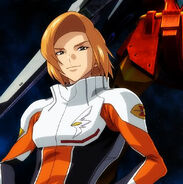 Heine and his custom GOUF Ignited

Illustration of Heine and the Minerva pilots