Hathaway Noa (ハサウェイ・ノア, Hasauei Noa?) is a fictional character from the Gundam franchise. He first appeared in Mobile Suit Zeta Gundam, and is most prominently featured in the feature film Mobile Suit Gundam: Char's Counterattack and is the protagonist of the novel Mobile Suit Gundam: Hathaway's Flash.

Hathaway was overall: a romantic, delusional, angry, and vengeful person. Growing up in turmoil times and not having a stable life. Hathaway lived a misguided life, especially with a career soldier as a father, Bright Noa. After falling in love with Quess Paraya, he did everything he could to help her. Even though she made it obvious that she was attracted to Amuro Ray, Hathaway always believed she had feelings for him as well. When Char took Quess, he was so obsessed in saving her that he was willing to break any rules and even kill people if they got in his way to be with Quess. When Chan Agi accidentally killed Quess during a MS battle, he was overwhelmed with anger and resentment against the Earth Federation and adults. He would live out his remaining life, loathing the Federation and taking action against them.

Hathaway later gave himself a new identity, Mafty Navue Erin, and piloted his own advanced Gundam to attack the Federation. He joined an anti-Federation crew called Mafty and the group caused trouble to the Federation controlled colonies. It was a ironic life-decision as his father, Bright Noa, was a dedicated Federation officer and was obligated to arrest and prosecute Mafty. Towards the end of his life, when he was trialled and sentenced to death by the Federation, Quess' spirit came to make it clear she never loved him. It was only then, in his final moments of life that he realized his actions in her name had always been in vain.

Hathaway is a newtype and a talented MS pilot.

Hathaway Noa was born in the year UC 0080, to Bright Noa and Mirai Yashima. He makes his first animated appearance along with his mother and his sister Cheimin Noa in the anime series Mobile Suit Zeta Gundam, while his father was in space. Due to his father's military service, he was absent for large periods of Hathaway's life.

Hathaway and his sister have a very minor role in Mobile Suit Zeta Gundam. They show up only briefly during the first time the series shifts towards Earth, along with their mother Mirai.

In Char's Counterattack, Hathaway escapes the doomed earth in a space shuttle. His shuttle is caught in a Neo Zeon battle, but Bright Noa rescues him. Hathaway becomes an unofficial member of Londo Bell and tries to assist tactically. In the final battle to stop Axis from colliding with earth he makes an attempt to persuade Quess Paraya to stop fighting by launching in a Jegan. Quess had already lost her mind and does not listen to his words of reason. Chan Agi, Amuro's girlfriend, launches in the RE-Gundam Zeta and saves Hathaway's life, destroying Quess in the process. Hathaway is not grateful, and he's infuriated over Quess' death. He attacks Chan's mobile suit. She does not fight back, and is killed. Hathaway is one of the few surviving characters at the end of CCA.

The novelization Beltorchika's Children, which was written by director Yoshiyuki Tomino, features several differences. One of the biggest ones for Hathaway is that instead of Chan killing Quess, it is Hathaway who does so accidentally.

The novel Hathaway's Flash is a sequel to the novel version of Char's Counterattack. Set 12 years after those events, Hathaway is now the leader of the anti-Federation group Mafty and operates under the alias Mafty Navue Erin. Despite piloting a powerful new Gundam, he is eventually captured and sentenced to death by Bright, who does not realize that he is his own son. Before he died Quess Paraya's ghost visited him and said she was never in love with him, making him realize he wasted his life. 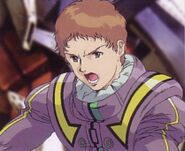 Retrieved from "https://gundam.fandom.com/wiki/Hathaway_Noa?oldid=145354"
Community content is available under CC-BY-SA unless otherwise noted.