A military physician assigned to the assault landing ship Nahel Argama. Hasan is a veteran doctor who served aboard the original Argama during the Gryps Conflict, and he has been with the Nahel Argama since the first Neo Zeon War.

At the start of the Third Neo Zeon War, Hasan was stationed aboard the Nahel Argama at the time they brought the RX-0 Unicorn Gundam aboard. When they finally got the hatch opened, they found a young boy Banagher Links inside. Hasan was his immediate physician as they awaited his recovery. When Banagher regained consciousness, Hasan asked him to squeeze his hand if he could hear him. As Ensign Mihiro Oiwakken picked up a phone to inform the bridge of Banagher's awakening, Commanders Daguza Mackle and Conroy Haagensen entered, wanting to question Banagher. Hasan politely asked that he first examine Banagher, as he doesn't know where he is. Micott Bartsch, one of the civilians Ensign Riddhe Marcenas brought aboard, protests that her friend is hurt. However, Mackle stated that he only sees a civilian minor who hijacked a military mobile suit and interference in a combat situation, threatening him with capital punishment. Mihiro politely added that Banagher saved all their lives but Mackle would have none of it. Hasan and the others then left the room.

Sometime later, after the Nahel Argama rescued Banagher and the Unicorn from the Sleeves stronghold of Palau, Hasan checked both him and the captive Cyber Newtype, Marida Cruz, in the infirmary. Mihiro expressed concern that she'd restrained or forced on medication for fear that she'd go berserk but Hasan refused to consent to that, believing that he was in no danger and that his oath forbids him from doing so. Banagher then sprang from behind the curtain, insisting that Cruz would never do that. He argued that she's a prisoner of war and deserved to be treated fairly. Mihiro retorted that the Sleeves are terrorists and Cruz is still responsible for the destruction at Industrial 7 and the deaths of Londo Bell soldiers. Mihiro then left, stating that they'll have Cruz put under guard.

As Hasan turned his attention to his computer, he reminded Banagher that Riddhe didn't return to the ship, and Banagher asked what a Cyber-Newtype was. Hasan told him that cyber-Newtypes were made from the delusion that Newtypes could be made artificially. Hasan said that it violated their own ethics as an excuse to create human war machines. Hasan inquired if Banagher understood the concept of Newtypes, and he told him that it was that when humanity moved into outer space, they were supposed to understand each other without misconceptions, but he then thought that wars wouldn't exist in that kind of world. Hasan explained that someone said that humanity was on the verge of a next stage of evolution and that if humanity was evolving into Newtypes, then Cyber Newtypes should be allowed. Banagher said that it was sad and Hasan agreed and said that people needed to work at understanding each other despite their limited abilities. Hasan then left the room for a few minutes before returning to find Cruz convulsing, forcing him to restrain her.

Over twenty days later, Hasan is in the infirmary, attending to a wounded crewmate as Sleeves started to occupy the Nahel Argama after saving them from destruction from the General Revil and they both listened as Full Frontal addressed the entire ship over his plans for Laplace's Box. 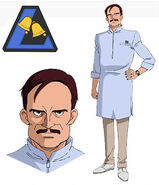