Harten is a fictional character from the After War Gundam X anime.

Harten owns a local tavern in the home town of Witz Sou. After the death of Witz's father and younger brother Pastell, Witz leaves town to become a mobile suit pilot. While Witz was away, Shora Sou finds comfort in Harten and later marries him, but keeps this from Witz due to his love of his father. When Witz returns home he discovers the marriage and leaves, going to the tavern not knowing that Harten is his step-father. Harten listens as Witz tells him of his reasons for leaving town in the first place, to use his talents of piloting mobile suits to earn money for his mother and siblings, and that he can't understand why his mother disapproves. Harten tells Witz that Shora has had a fear of mobile suits ever since his father was killed by one while trying to protect the farm fields. This fear has transferred over to concern and worry for Witz's safety and the dangerous short life-span of mobile suit pilots.

Witz learns soon after being told the reasons his mother doesn't approve of his lifestyle that Harten is the man she re-married. 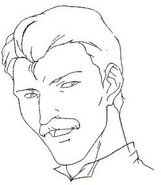 Retrieved from "https://gundam.fandom.com/wiki/Harten?oldid=349447"
Community content is available under CC-BY-SA unless otherwise noted.