Harry Ord (ハリー・オード, Harī Ōdo?) is a fictional character in Turn A Gundam. Harry is the head of Dianna's Royal Guard, reporting directly to the Queen herself. He pilots a distinctive gold-plated MRC-F20 SUMO and is easily one of the most skilled fighters in the series. An accomplished military strategist, Harry judges situations with a cool and rational demeanor. He is the only person who is readily able to distinguish between Kihel Heim and Dianna Soreil.

Harry remains loyal to Dianna throughout the series. Though he falls in love with Kihel, his duty to the throne always comes first. He uses a large pair of red sunglasses to mask his true feelings. Even when in disguise, Harry still wears glasses that conceal his eyes. While never stated in show, the manga adaption remarks that Harry's vision is impaired, while his other senses are heightened to make up for it.

Calm and collected, Harry's primary concern is the safety of Queen Soreil, and it is only when that is threatened that he shows signs of breaking his tranquil demeanor. He has a strong sense of justice, and will sometimes go as far as to confront even his Queen about matters that he views are irrational and unjust.

Very little is revealed about Harry's personal life. One fact that was revealed by Harry himself to Kihel (who was under the guise of Dianna at the time) was that his parents were put into cryostasis but due to the family being of lower status they did not receive as high quality care as nobles would and his father died shortly after being frozen (his mother is presumed to still be alive). What is never stated in the television series is that Harry was also apparently married to woman named Amanda only to be divorced from her prior to his enlisting in Dianna's Royal Guards. Additionally, before becoming a Royal Guard, Harry served as a soldier under Gym Ghingham but later quit due to his distaste for the elitism present in the Fleet.

The Queen of the Moonrace and her safety is the veritable raison d'être, as he puts her above all else. His loyalty to the Moonrace comes secondary to Dianna's.

The Heim's oldest daughter was nonexistent to Harry for the beginning of the story, but after he discovers that she and Dianna switched places, he starts to develop strong feelings for her. He admits to Kihel that these feelings conflict with his devotion to Dianna but tells her that "the eyes beneath his glasses are still searching for another lady." Harry remains by her side as she and Dianna switch places in the end and Kihel permanently assumes the identity and role of Queen of the Moonrace.

Unlike the typical masked ace of a series, Harry does not see Loran as a rival, or even as much of a threat. He confronts him only when he feels that Loran's activity is stepping out of bounds, and as the story progresses he develops a degree of respect for Loran and his ideals.

Throughout the series a great deal of tension builds between Lieutenant Poe and Harry as Poe becomes fervently loyal to Phil Ackman and his goals to overthrow Dianna as ruler. Harry, along with Loran, always manage to keep Poe from completely carrying out Phil's orders and causing harm to Dianna. Because of this, Poe grows to detest Harry despite how he continually deals with her in a civil manner. By the end of the series, both Phil and Poe have a change of heart and resume their duty of protecting their queen. Poe pilots a silver SUMO in the final episodes and accompanies Harry and the Royal Guards in the Dianna Counter's attempt to defeat Gym Ghingham.

Young Harry Ord as seen on ∀ Gundam: Wind of the Moon 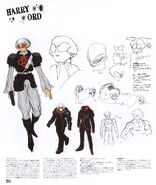 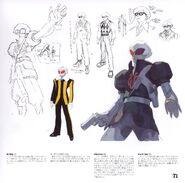 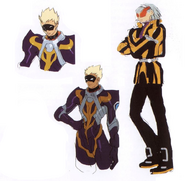 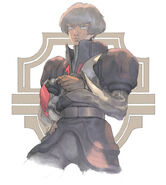 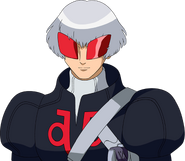 Turn A Gundam characters on Wikipedia

Retrieved from "https://gundam.fandom.com/wiki/Harry_Ord?oldid=468136"
Community content is available under CC-BY-SA unless otherwise noted.