The Haro (ハロ, Haro?) are mass-produced assistant robots to Celestial Being in the Mobile Suit Gundam 00 series.

In the paramilitary organization, Celestial Being, there are a numerous Haros that assist their organization. Their primary function is maintenance over Celestial Being's technology. They can assist in piloting a Gundam, calibrate systems, repair, network communications, and have their own AI to make certain independent judgments. Furthermore, they are also data terminals as they have a connection to Veda. While they have legs and arms to travel and walk, they tend to remain in their ball form when traveling around in space or land. The best known Haro is the Orange version used by Lockon Stratos, who uses it to pilot Gundam Dynames while Dynames is in sniper mode. The second Lockon Stratos also uses the orange Haro for this purpose, in the Cherudim Gundam. Other prominent Haros are the purple unit used in Gundam Throne Drei by Nena Trinity, the red Haro which aids Saji Crossroad in piloting the 0 Raiser, and yellow Hanayo (also distinguished by its cat-like ear flaps) as well as two Blue and Orange version of Haros that the GN-010 Gundam Zabanya uses to assist in targeting enemy forces with the Bit Control System. Nena's purple Haro has a very rude personality and is one of the oldest Haros by Celestial Being alongside orange Haro,[1] while Hanayo is revealed to be the alter-ego of Gundam Meister 874. The Ptolemaios carried at least 28 Haros. It is unknown how many are carried on the Ptolemaios 2. Team Trinity's purple Haro is confirmed to be linked with Veda, as Ribbons Almark can hijack it with his ability to control Veda. The Haro has a diameter of 25cm. Nena's purple Haro had data of GN Drive construction and the data is used by the Corner Faction to create the pseudo solar furnaces called GN Drive Taus.[2] In order to prevent data leakage outside of the organization, there are only a limited amount of Haros created.

The specific time that Haros were invented is not known, however the purple Haro from Europa and later owned by Team Trinity and the orange Haro owned by Lockon Stratos are some of the oldest Haros in the organization, having existed since Aeolia's time.[1] The purple Haro inside the Europa probe contained the blueprints of the GN Drive which would later be developed into the false GN Tau drive by the Corner Family in order to destroy Celestial Being. The latter has had its original memory erased[1] and as a result it was unable to recognize it's "brother" when they met. 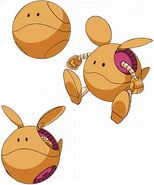 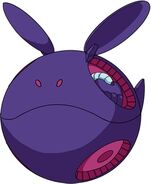