Haro (ハロ, Haro?) is the mechanical mascot of the Gundam franchise, and is one of the few characters that appear in more than one timeline.

The original Haro is a small robot companion built by the main character Amuro Ray. It is a testament to Amuro's exceptional talent for machinery (Though some sources, such as Gundam Fact File and Mobile Suit Gundam: The Origin, indicate that Haro was a commercial toy released in U.C. 0078, and Amuro's Haro was merely a heavily modified one). Haro's features include a limited range of speech, and the ability to hover (in environments with atmosphere and low gravity) by flapping its appendage coverings. Haro can usually be found rolling behind Amuro's next door neighbor Fraw Bow. Perhaps the most amazing function of Haro is the ability to detect brain waves. In the last episode of the original Mobile Suit Gundam, Haro actually claimed that Amuro's brain waves had changed, possibly referring to his awakening Newtype abilities.

In Mobile Suit Zeta Gundam, a mass-produced Mk-II version of Haro ends up in the hands of that series's main protagonist Kamille Bidan, who initially suspects it to be the original. He repairs the robot, only to have it constantly address him as Amuro.

During the events of Mobile Suit Gundam: Char's Counterattack, Amuro gives a third-generation Haro to Hathaway, the son of his captain Bright Noa.

In Mobile Suit Gundam Unicorn, it is mentioned by Banagher Links that Haros were all the rage for children after the One Year War. He owns a replica of Amuro's Haro.

In Mobile Suit Victory Gundam, the main character Üso has a Haro replica that he received from his father. Üso's Haro possesses a remarkably advanced artificial intelligence, and is even capable of piloting mobile suits.

In G-Saviour, the mobile communication devices used by various characters in the film are referred to as "Haro".

In the Turn A Gundam manga, there are variations of Haro that are used for security, with technology based around the Bugs from Mobile Suit Gundam F91 in the city sewers of Moonrace.

Haro continues to permeate the Gundam franchise, having appeared in Mobile Suit Gundam SEED as Lacus Clyne's multi-colored horde of simple-speech robot pets, built for her by Athrun Zala. These Haros are roughly 1/4 the size of their Universal Century counterparts and are similar in function, however a few possess certain abilities such as unlocking doors. Lacus's favorite Haro is a pink machine that she refers to as "Pink-Chan" (often translated as "Mr. Pink" or "Pinky"). Another notable Haro in Lacus's collection is "Navy-Chan", a navy blue robot on which she paints a mustache bearing a distinct resemblance the facial ornament of the ∀ Gundam of the CC (正歴 Seireki) calendar system. The rest of Lacus' Haros have been seen in yellow, orange, blue, green, and black. The parody comic Mobile Suit Gundam SEED Club Yonkoma states that Athrun has built a total of 35 Haros for Lacus.

In this continuity, Pink-chan often adds "omae mona" or "you too" to its sentences, depending on the language he is in (you too for the English translation, and vice versa), and often interjects with "Haro!" and "Dammit" (In the English version) without reason.

In Mobile Suit Gundam SEED Destiny, Lacus impersonator Meer Campbell is often seen with her own red Haro. Unlike other Haros, which speak Japanese, "Mister Red" speaks in English. It is unknown as to what became of Meer's Haro after her death, but it can likely be assumed that it is in Lacus's possession.

In the paramilitary organization, Celestial Being, there are a numerous Haros that assist their organization. Their primary function is maintenance over Celestial Being's technology. They can assist in piloting a Gundam, calibrate systems, repair, network communications, and have their own AI to make certain independent judgments. While doing maintenance, the Haros usually pilot machines called "Karel" in order to physically facilitate the repairs.[1] While they have legs and arms to travel and walk, they tend to remain in their ball form when traveling around in space or land.

The best known Haro is the orange version used by Lockon Stratos, who uses it to pilot Gundam Dynames while Dynames is in sniper mode. The second Lockon Stratos also uses the orange Haro for this purpose, in the Cherudim Gundam. The second Lockon would use orange Haro again along with a blue Haro to fully pilot the Zabanya Gundam. Other prominent Haros are the purple unit used in Gundam Throne Drei by Nena Trinity, the red Haro which aids Saji Crossroad in piloting the 0 Raiser, and yellow Hanayo (also distinguished by its cat-like ear flaps). Nena's purple Haro has a very rude and malicious personality and has had his memory prior to the Jovian GN Drive mission deleted,[2] while Hanayo is revealed to be the alter-ego of Gundam Meister 874.

The Ptolemaios carried at least 28 Haros. It is unknown how many are carried on the Ptolemaios 2 though along with Lockon's orange Haro and Saji's red Haro, a green Haro was also known to be aboard and helped from time to time with the repairs to both Ptolemy and the Gundams. Team Trinity's purple Haro is confirmed to be linked with Veda, as Ribbons Almark can hijack it with his ability to control Veda. While it is unknown when exactly each Haro was constructed, the purple and orange Haros are known to have existed ever since Aeolia's time.[2]

The Haro in Mobile Suit Gundam AGE is created by main character Flit Asuno. This Haro appear to be extremely elastic, and has the ability to bounce as high as a mobile suit's cockpit. It also has a "PC Mode" which allows it to be used like a computer, and also link to the AGE System. Like the UC Haros, this Haro is light green.

Haro appears as the mascot of Gunpla Battle World Championship. Sei Iori's alarm clock is Haro themed, and so is the hobby apron used by Sei and his mother.

In Regild Century, there is a Haro-like robot named Nobell. It is a Harobe-type robot used for environment check, and is named after the main character Bellri and his friend Noredo.

In Gunpla Battle Nexus Online, Haros are used as game avatars for players who are logging in as Guests, as seen with Momoka Yashiro first trip into the game. The Haro's appearance can be altered - Momoka's pink Haro avatar was given cat ears by Magee as a welcoming gift, resulting in a look that invoke both Lacus Clyne's "Pink-chan" Haro and Hanayo's Haro form. As well, Tsukasa Shiba also played the game as a Guest Diver, using a dark blue Haro resembling the one used by Team Trinity.

In the real world, both Nanami Nanase and Koichi Nanase wear hobby aprons sporting Haros on top as part of their Gundam Base attire.

In Superior Defender Gundam Force, "Chief Haro" is the leader of the SDG, who is wearing a Haro helmet to mask his real identity. Though he cannot "fly" like his toy counterpart, his "wings" do flip up his cap every-so-often.

A large Haro with the same cap as Chief Haro can also be seen attached to the Re-Equip Ring in the series. It also has two large wings mounted to its sides similar to that of a Medea Transport from the original Gundam series.

In the game Gundam SEED: Never Ending Tomorrow, there is a special mode called "Haro Madness" where you fight gigantic versions of "Pink-Chan", "Navy-Chan", and a green Haro. They have their own signature traits, and this mode is said to be one of the hardest in the entire game.

In the SD Gundam G Generation series, Haros frequently appear as secret units, generally ones of overwhelming power, such as the giant "Psycho Haro" of SD Gundam: G Generation Zero - which is easily capable of destroying an enemy fleet in a single turn. Haro are large unit, often protected by I-field barrier and can fight effective in all terrain. The weapons are varies by games, but usually has tackle, bubble bombs and mouth mega particle cannon. Psycho Haro has extendable arm punch, Haro bits (which are as large as mobile suits, yet launch in countless swarm),  four mega particle cannons (in each hand and eye),  and crushing roll MAP attack. SD Gundam G Generation F.I.F feature a special stage where player must fight against an army of both Haros and Psycho Haros (plus some Psycolo Gundams), each piloted by Ultimate Berserker Haro, a purple Haro infected with DG cell-like "Haro virus" in orbit of Haro planets, which is a planet-size Haro. SD Gundam G Generation SEED has a stage where Lacus asks the player to help find Pink-chan and, in turn, must face down an army of Haros lead by Pink-chan. Defeating Pink-chan completes the mission.

In the Super Robot Wars series, Haro is often one of the best enhancement parts available. In early games, it greatly boost unit's agility and mobility and in later games also increase weapons's accuracy and range. Haro is replaced by Fatima in games that feature Heavy Metal L-Gaim. In some of the later games, Haro is replaced by Super High Performance Electronic Brain.

During the Extreme Vs. series, Amuro's Haro acts as one of the game's navigators. Neil Dylandy and Lyle Dylandy's Haros are referenced and can occasionally be heard speaking during battle.

In the video game Dynasty Warriors Gundam, Haro is one of the items that are dropped after defeating an enemy boss. By picking it up, your mobile suit's armor gauge, SP gauge, and thruster gauge are entirely refilled.

Haro is also an unlockable partner in Dynasty Warriors Gundam Reborn. When summoned, Haro will pilot either of the Musha Gundams or the Knight Gundam depending on the map type. The Haro item also makes a return serving the same purpose (while also refilling the Burst bar as well). 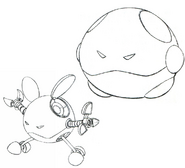 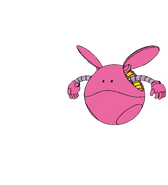 Haro as seen in the Turn A Gundam manga.

Retrieved from "https://gundam.fandom.com/wiki/Haro?oldid=501100"
Community content is available under CC-BY-SA unless otherwise noted.