The Half Zeta Gundam is a prototype transformable mobile suit that's appears in the short manga Mobile Suit Zeta Gundam 1/2 UC 0087: Another Story. The unit is piloted by Edmund Edgar Smith.

Despite its name and appearance, the Half Zeta Gundam's characteristics is very different from the MSZ-006 Zeta Gundam and its variations. The biggest change is that the unit actually separates into two parts - the actual Mobile Suit and the Flight Unit. The latter acts as an independent piece of equipment, akin to the RGZ-91 Re-GZ in that it docks with the actual unit to transform into Waverider mode. Another change is the lack of weaponry - it only carries standard vulcans system, two beam rifles that can dock on the Flight Unit, and a set of beam sabers. It is highly possible that the Flight Unit's design made it impossible for the Half Zeta Gundam to carry additional weaponry.

Unlike most of the transformable unit of its time, the Half Zeta Gundam features a separate flight unit for Waverider mode. Beside its original purpose, the flight unit can also be taken from its mounting point on the back to become a shield, and then the beam rifles can be attached for offense.

Curiously, the technology would once again be employed by the RGZ-91 Re-GZ; however, the Half Zeta's is more advanced in that it can separate and dock with its flight unit during combat.

The Half Zeta was originally made as an experiment of the transformable system. After receiving it from Anaheim, Karaba pilot Edmund Edgar Smith modified its appearance to be more similar to the famed Zeta Gundam, hence the name "Half Zeta Gundam".

Sometime after the Gryps War, Karaba spread out as many Amuro Ray impostors as possible around the world so as to use his fame to boost the morale of their members, while restricting Titans's activities because of fear. One of these impostors, a woman, was caught and held captive in a South East Asian Titans base. While knowing the true identity of the woman, Edgar still piloted the Half Zeta Gundam in a daring rescue operation with himself only. It was in this mission that the MS showed its true potential, destroying several Hizack, including a one-on-four confrontation. 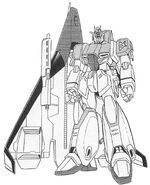 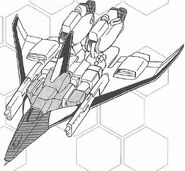 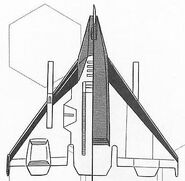 Retrieved from "https://gundam.fandom.com/wiki/Half_Zeta_Gundam?oldid=435206"
Community content is available under CC-BY-SA unless otherwise noted.