The Gundam F91 Heavy Weapons Type was an alternate weapon configuration for Gundam F91 in case SNRI is unable to finish development on the VSBRs. This configuration replaces the VSBRs with a pair of beam gatling guns and anti-ship missile launchers. It also features improved shoulder armor with more thrusters, as well as four heat radiation fins in each shoulder instead of three.

A pair of head-mounted shell-firing guns that serve as mid-close range defensive weapons. While they do little damage against the armor of a mobile suit, they are useful for shoot down incoming missiles, small attack vehicles, or to deter closing in enemy machines.

A pair of mega machine cannons is mounted in the chest and they are more powerful than the vulcan guns.

The beam saber is the standard close-combat weapon of most mobile suits, it emits a blade of plasma contained by an I-field that can cut through any physical armor not treated to resist it. It is powered by a rechargeable energy capacitor and the F91 has two beam sabers stored in the left side armor. The hands of the F91 are capable of rotating 360 degrees continuously, and when it holds the beam sabers, this effectively creates a beam buzz saw.

A 2-tube anti-ship missile launcher is located at the top of each beam gatling gun. They are mainly used for mid-to-long ranged bombardment, and because of the ballistic nature, the missiles are particularly effective against targets with beam-resistance.

The F91 Gundam Heavy Weapons Type has a pair of beam shield generators, one mounted on the left forearm and another stored in the right side armor as a spare. The beam shield blocks both beam and projectile weapons. It generates a plane of energy similar to the blade of a beam saber. This plane is divided into multiple sections, which can be turned on or off as needed to conserve energy. Individual sections are also automatically deactivated whenever they're in danger of coming into contact with the mobile suit itself. Like beam sabers, the F91's beam shields have an internal battery that can power the shield even when not connected to the mobile suit.

Rear Lineart
Add a photo to this gallery 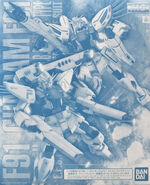 Retrieved from "https://gundam.fandom.com/wiki/HWF91_Gundam_F91_Heavy_Weapons_Type?oldid=497944"
Community content is available under CC-BY-SA unless otherwise noted.